Home » TV on Radio Hits the Road for Release of “Nine Types of Light!”

TV on Radio Hits the Road for Release of “Nine Types of Light!”

TV On The Radio are releasing Nine Types Of Light on April 12. 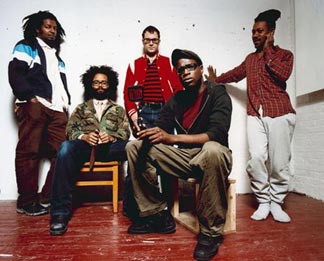 You can hear all the new songs on Nine Types of Light live soon, as the band will soon hit the road on a world-wide tour.

The band that coined the term “shit-hot thrilling music” join the madness AKA SXSW,, headlining the SPIN party at Stubb’s Friday, March 18, then the MOG show at Mohawk the next day.

The band then heads to NYC to celebrate the release of their fourth studio album in style- hitting two great stages that week. They headline Radio City Music Hall on April 13, then The Ed Sullivan Theater for an April 14 appearance on The Late Show with David Letterman.

TV On The Radio continue down the tour road until, before you know it, it’s already summer and time to headline the Sunday, July 17, day of the Pitchfork Music Festival in Chicago.

Nine Types of Light is the follow-up to the band’s incredibly fabulous 2008 release, Dear Science, which proved to be a breakout release. It was named album of the year by Rolling Stone, Spin, Pitchfork, Entertainment Weekly, MTV and NPR; touring behind the album, the group sold out a year’s worth of live shows across the world. This, however, did not prevent everyone from referring to TV On The Radio as a Brooklyn band.

On this new album, the group takes a more direct and simpler approach to some of their songs, but TV On The Radio do not write traditional pop songs. Often, they change direction two or three times in one song – distorted guitars, sauntering and reverberating bass, a drum beat that is just the slightest bit off-center: these all give the impression that TVOTR tunes are just-barely containing an explosive amount of energy underneath itself – and that tension is nothing less than exhilarating.
“Will Do” starts out with wind chimes before giving away to that trademark buzz, with Tunde Adebimpe singing about the yearning for his ungovernable, unrequited love of another. “I think the songs on this album, to me, maybe sound simpler,” Tunde says. “But it just might be that we have gotten better at what we do.”

HEAR “Will Do” from the upcoming album “Nine Types of Light”
Link: Will Do

You might want to pre-order this on iTunes– or see about a hard copy!
Stevie Wilson, LA-Story.com

Get 10 free samples of our BEST skincare, all in one bag z FREE with any online order. Enter code SPLURGE at checkout. While supplies last!

Buy $30 of NARS and get a free mini Orgasm nail polish ($7.50 value) at Beauty.com. While supplies last.