Mad Men’s Elisabeth Moss breaks out of the proper Peggy Olson persona and now dishes about her short-lived marriage to Fred Armisen.

Sitting down with writer Carrie Seim at the Sunset Tower Hotel, Moss lobs a post-divorce grenade at the Saturday Night Live funnyman: 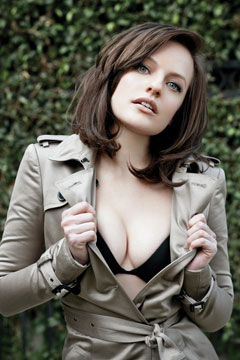 Posing in a revealing trench coat and lingerie for Page Six Magazine’s cover, Moss says of her saucy new look:

“People will be surprised. I don’t walk around in a Burberry trench coat and bra all the time, but it’s fun to embrace that part of yourself. I think every woman has a sexy, adventurous side.”

(And nicely done, because it shows a side of Elisabeth Moss that the public has not had a chance to see– or know.)

About her biting remarks, she adds:

“I’m probably gonna get a slap on the wrist. But I’ve just been such a good girl. And sometimes you just want to be a bad girl for a minute.”

The 5-foot-3-inch actress is surprisingly candid about (and clearly reveling in) her single life since filing for divorce after less than a year of marriage. She and Armisen met in October 2008, when Moss dropped by for a cameo on SNL the night her Mad Men costar and pal Jon Hamm hosted. Four months later, Armisen and Moss were fawning over each other publicly.

“It’s fun to go out at night and not know what’s going to happen. I’m addicted and obsessed with my freedom in that sense. I’m having fun!”

On being a feminist icon:

“As women in the workplace, we’re constantly trying to find a balance between being taken seriously and feeling sexy and good about ourselves…if you believe your ideas should be respected and if you believe you have a voice, then you’re a feminist.”

On eventually having kids:

“I have a tremendous amount of respect for my mother, and it makes me want to be a really great mother. And sure, in an ideal world I can do it all. But I think for now I’m too young to know. You almost have to get older to understand that you’re too young to know.”

When last seen on Mad Men, Peggy’s personal life was a veritable roller coaster.
She had befriended a bohemian lesbian, rebuffed advances from former flame Duck Phillips, broken up with her conservative boyfriend Mark Kerney and slept with a counterculture political writer after pretending to be a virgin

On season five of Mad Men, premiering March 25, she says:

Check out the entire interview with Elisabeth Moss which includes the scoop on her role for a movie being shot “down under” and also that she’s a Scientologist — as is her family– in Page Six Magazine, free inside the New York Post and at http://www.nypost.com/pagesixmag