Are you a foodie? If you are, you probably know Adam Richman. If you don’t know Adam or aren’t a foodie but LIKE TO EAT, then you need to see this new show debuting on the Travel Channel on Wednesday, June 6 at 9:00 p.m. and 9:30 p.m., ET/PT, “Best Sandwich in America”. This is essentially an “sandwich-off” of key regional sandwiches. This 11-episode weekly series (10 half-hour shows with a special one-hour finale) documents Richman’s nationwide quest to find the best thing since sliced bread ON sliced bread. 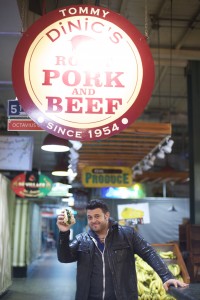 Using his own BITE SCALE (B=Bread, I=Interior, T=Taste, E=Eating Experience), Richman samples and judges the three most mouthwatering masterpieces a region has to offer. After naming a regional favorite in 10 geographical locales, each winning sandwich moves to the finals, to face off against each other and two secret wildcards – earning a chance to compete in the ultimate national championship – and fight for the title of “Adam Richman’s Best Sandwich in America.” Travel Channel fans will also have the opportunity to participate in the show. Starting today, viewers can log on to travelchannel.com to vote for a wildcard sandwich to compete in the running for “best sandwich in America.”

I have provided you just 50% of the podcast and the transcript goes on for eons because the chat was over an hour long. I hope you find the time to see this show because I dare you to watch it and not want to book a flight or hunt down the sandwiches he’s test-driving regionally and find recipes for them.

Here’s Adam’s intro via transcript. You can hear it on the podcast, but this actually gives you the guts of the show.

Hi, everybody. So everything is so formal. It’s very high tech and very cool. I think that that’s kind of why I love this sandwich because it’s sort of both of those things and none of those things.

I think for me as someone who has worked in the food industry for the better part of three decades that, you know, I’ve always appreciated the sandwich because, in essence, at the risk of sounding too esoteric, it really is just your imagination bounded by two pieces of bread. It’s whatever you want it to be in any incarnation.

And, in fact, you know, now in this day and age where you see people using variants like waffles for bread or biscuits or even grilled cheese sandwiches for the bread of another sandwich, I think it really is one of the most clear manifestations of what food can be if you truly do have with it.

To that end, the idea for the series, you know, when Man Vs. Food Nation was coming to a close and Man Vs. Food had already ended, I was in the very fortunate position where people were wanting to work with me and lots of concepts were being (unintelligible) about and lots of opportunities were coming my way but a lot of the concepts were very, very muddy and very, very convoluted.

And quite frankly, a lot of them were really copies of stuff that I think everyone on this call, including myself, had already seen several, several times. And I think that the art cooking competition show is wonderful but has certainly been done in numerous incarnations.

I think that, if it’s possible to borrow one of my favorite phrases from the British, it’s possible to over-egg the custard and so I was talking to my co-exec producer at an airport gate once. We were just talking about the next move and I said, you know, (Dan), sandwiches are just — I said, you know, people tell me that they follow the show because they want to know the great places to eat around the country. It’s they stuff they want to eat. It’s the stuff that we all love.

And it’s the stuff that, moreover, we can all afford. And that’s all really important to me. You know, I have friends with children and I do think about that. I do think about, you know, giving an affordable, fun destination for them to explore. And to that end, I just thought, what if we just did something like really great sandwiches. Everyone loves sandwiches. Every culture has sandwiches in it, cuisine-wise, so let’s go for it.

We eventually developed this concept which has sort of derived structurally from March madness in that we’ll have, you know, 10 regions and they’re iconic sandwiches going head to head and the idea that it’s my personal favorite sandwich. You know, my best sandwich is not going to be someone else’s, but very clearly if you’re comparing a lobster roll to a cheese steak, it’s going to be inherently subjective. So just using my palate as the one sort of constant, it’s just an amazing exploration of the form of the sandwich.

Sandwiches mean the culinary expression. Sandwich in terms of fun and we all know it. Like it’s what mom made us when we were hungry. It’s what we brown bag it for lunch. It’s what, you know, restaurants put on the map. It’s what you can bake with the most minimal of ingredients or the most expensive of ingredients and it’s — I have to say — one of the most fulfilling productions I’ve ever worked on, as again it’s cheesy to say.

But it’s just awesome. I haven’t been around a crew or a kitchen crew that has had as much fun as I have been in the course of this show. I’m up for questions. I don’t know. I feel like I’m spinning my wheels. I would much rather be here for everyone who’ve been waiting so patiently. So if you guys wanted to open up for questions, I feel that perhaps I might be able to give a little bit more to the process. So I am here at you disposal.

Now if you know Adam Richman’s voice and personal presentation, he means every word you just read. And he’s authentic in his love of food and sandwiches. Here’s 30 minutes of the interviews– with about 75 minutes, I couldn’t break it down or carry it over that long. It’s just the first 30 minutes.

In case you are wondering what’s going to be featured on this great show (trust me.. it’s GREAT! I saw two episodes. YUMMY!)

Adam Richman grew up in the food Mecca of New York City and began his love affair with food early on, sampling all of the diverse culinary specialties The Big Apple had to offer. From samosas to sushi, even at a young age, Richman had a desire to taste it all. After earning a master’s degree in fine arts from Yale University’s School of Drama, Richman traveled the United States acting in many regional theaters. The nature of his work allowed him to feed his appetite for the best local dishes across America – all of which found their way into his food journal.

In 2008, Richman began hosting “Man v Food” for Travel Channel, which quickly became one of the network’s most popular shows with a passionate fan following. With “Man v Food Nation,” Richman not only hosted but served as co-executive producer for the series. In Richman’s newest series on Travel Channel, “Adam Richman’s Best Sandwich in America,” he crisscrosses the country on a mission to find the best thing since sliced bread ON sliced bread. Premiering in June 6, 2012 he serves not only as host of the travel series, but also as an executive producer.

Richman’s first book, “America the Edible” (Rodale Publishing), hit stands November 9, 2010 and his second book, “Quest for the Best” (Clarkson Potter) will hit stands in fall 2013. Richman is a regular contributor for the TODAY Show, a board member of the Armed Services Foundation and a popular lecturer in the college circuit.