Home » Movies & TV Series on DVD: The Good, the Newly Discovered & the Confusing.

Movies & TV Series on DVD: The Good, the Newly Discovered & the Confusing.

Lots of new DVD/Blu-ray discs out there and here’s what’s come across my player: 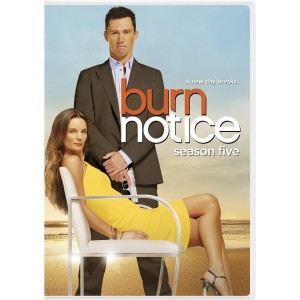 Given that my DVR missed about 50% of this season (thank you FIOS! I need to get a new DVR from you since this one isn’t recording things I have set up), I was glad to snag this set and see the entire season. It makes so much more sense particularly since I missed the finale!

However Season 5 in HD was really great as Michael Weston transitions and the relationship with Fiona heats up and things just get crazier and crazier — particularly with Pierce (CIA Supervisor) as Weston’s ball and chain. Love the finale– it was smoking and my jaw-dropped when it was over and I was stunned that the finale ended that way. WOW! Particularly good to rewind/repeat if you haven’t caught all the nuances (read episodes) of Season 6!

Burn Notice Season 5 can be purchased at Amazon.comm and purchased at mass merchandise stores as well as places like Best Buy. 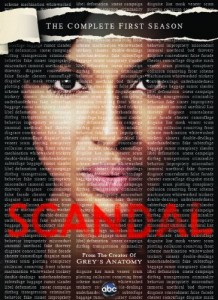 New to ABC is Kerry Washington playing with the big boys on Capitol Hill in Scandal. As a former White House staffer gone independent as crisis management specialist, Kerry Washington certainly rocks the role as Olivia. The initial episodes are sizzling and give you more insight into the way that things happen in the White House. While some things might be embellished because it’s TV, Shonda Rimes is not far off the mark when it comes to certain things and quite frankly, you should watch this before the campaigns get much further. This is very accurate on how people play in the Capitol and I am not talking partisan politics- -it’s just plain facts.

Sordid facts come out, people reveal true and not so true feelings and it’s quite captivating. What happens in season 2 will tell whether this series has legs– and if Kerry Washington as Olivia Pope can hold her own against the big boys on both sides of the aisle as well as those who seek to manipulate those in power by any means.

Scandal can be purchased at Amazon.comm and purchased at mass merchandise stores as well as places like Best Buy. 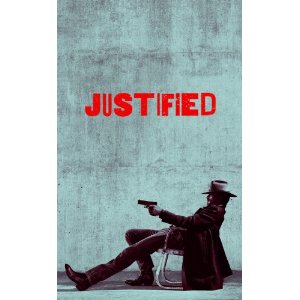 Justified is a newly discovered series on FX and I am caught up on seasons 1 and season 2 and ready for season 3 to hit DVD since it just wrapped up on FX channel.

Think of this as vintage TV meets out for justice cop meets modern lawmen: one part McCloud, one part Dirty Harry and one part a hunk of good-looking man playing a federal marshall with a drawl, a soft way about him and a really accurate aim. He says what he will do and he delivers on that. Mix in getting yanked back and forth between his former boss who is now his current boss (at the end of season 2) which is in his home state where he’s well known — on both sides of the good and bad fence- not to mention a sort-of girlfriend, an ex-wife and more– Timothy Oliphant rocks this role to high heaven. He’s slick as silk and hard as nails and tough enough to get the job done but not without getting dirty in the process. 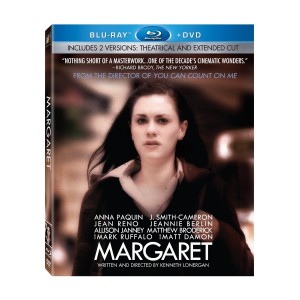 Margaret is a movie that might have sat on the shelf a bit or maybe it was a film festival film. While on Amazon.com the reviews seem in general to be good, I had no clue what I was going to see when the disc arrived for me to review, I pulled the disc to review based on a stellar cast featuring Anna Paquin, Matt Damon, Mark Ruffalo (almost unrecognizable)<> Mathew Broderick and a slew of really name brand actors.

MARGARET focuses on a 17-year-old New York City high-school student Lisa (Anna Paquin) who feels certain that she inadvertently played a role in a traffic accident that has claimed a woman’s life, Monica (Allison Janney): Lisa was chasing a bus whose driver Maretti (Mark Ruffalo) ran a red light because of Lisa’s distraction trying to discover where the Maretti bought his cowboy hat. Monica dies in Lisa’s arms while asking for her daughter also named Lisa (we later learn Monica’s daughter died at age 12 from leukemia).

First off, I wasn’t sure if Margaret was in college or high school. Her mom seems pretty distracted and lost in the parenting world– which given that Margaret is in high school seems pretty normal. Matt Damon as her teacher doesn’t “reach” her as well as he could – but his character tries. Think of a 17 year old girl loose in Manhattan with a ‘tude of princess and you get a good feel for Margaret until that woman gets killed. She is lost in a morass of emotion and the story line is hard to follow. I watched it with someone else and we got BORED by the day to day plot that seemed to ramble on. While this was supposed to be a snapshot into the life of a girl who suddenly gets involved in someone getting killed, there’s a lot of missing pieces that unless you are willing to REALLY dig deep into the movie, you will not get it. Consider me one of those who didn’t get the depth. Paquin was accurate as the annoying teen. Her mom was ideally played as a single parent trying to juggle acting, dating and parenting (that’s a struggle). Damon was good. Broderick was good. Ruffalo metamorphs into his role. He’s awesome.

Margaret can be purchased at Amazon.comm and purchased at mass merchandise stores as well as places like Best Buy.

Buy $50 in Darphin products at Beauty.com and get a free Darphin Stimulskin Plus Serum ($40 value!). While supplies last.