Down where I live near the beach, we have a “main drag” that is definitely a great “walk” and it’s filled with chain stores plus some interesting indie stores (a Powell’s is a candy store that has homemade gelato, ice cream, sorbet and every kind of vintage & imported candy they could find and is next door to a chi-chi higher end boutique that has some really nice shoes and clothing–with price tags to match). The area is known for a bit of quaintness mixed with lots of fun places to hang out and dine. However we have had a lot of changes on “the street” of places to eat– as well as other areas. Lately, it’s been interesting on how to find out when something is open because despite Yelp, Facebook and their own websites, the information seems to be incorrect or just plain missing.

My partner I wanted to go out to a new place for some small plates and a couple cocktails. Our first choice — Nick’s on 2nd— was a new restaurant with a full bar that had finally opened despite over 6 months of waiting. I had driven by enough times to see people on the patio and inside the restaurant at various times of the day. I figured that since the paper had come down off the windows and there were no “grand opening coming ” signs out there, we figured that this place was open. We started to walk in because there were other people in there eating.. but were stopped. Turns out it wasn’t “open” yet. They were doing a soft opening for VIPS and otherwise.. make a reservation for later in the week.
Here’s the review that I wrote on Yelp about this experience– and you can see it was RECENTLY written.

If you scroll down to ROBEN’s review– that’s my review EXACTLY. There was not sign that said Grand Opening date.. I drove by at least 4 days before we hit there and saw people eating inside. I get the point of the soft opening.. but if you aren’t going to welcome the public– put a SIGN there.
I was there for my birthday.. it was the place of choice. I loved Bonos — was looking & waiting for EONS for this resto to open.– only to be told go away.. make reservations for Thurs by the busboy. (lovely — not). So off I went to hit 2 more restos neither of which were open despite their signs, facebook page and website.
that being said.. we have yet to visit there.
If you check my reviews on Bonos.. you would find that I was a true regular- it was my default place to go have a cocktail or snacks or just hang out.

I think your reply to Roben was meh- because you didn’t have a sign and once you take down the paper and one sees people eating on the patio, eating inside and then get told that you aren’t open, it’s a bit hard. At least Simmzys had a sign that said– we are not open yet. We are practicing. (smart to do that too).

Eventually I will get there. Just very very disappointed when I REALLY wanted to test drive your bar, your menu and write a review.

We MiGHT have gotten there by now- because I am writing this a week earlier than it’s being posted, I am wanting to go but my partner isn’t so thrilled about it! He wants a happy hour and I want to try what used to be my default place for any kind of meal (except breakfast).

So, second choice was a place called THE ATTIC which replaced an old stand-by restaurant near several businesses we frequent. This iteration of the restaurant features breakfast, lunch and dinner and on it’s Facebook page and it’s website, it says they are open all day. Turns out — not so much of that is true! We drove over to the restaurant and thought it was open because the DOOR WAS OPEN.
Here’s my review:

The Attic on Broadway Category: American (Traditional) 9/7/2012
I had read their Facebook page and their website and saw that it was OPEN for B/L/D and it was already doing business.. which I thought was great. It doesn’t say if they are closed on any specific days– in that ‘hood, best not because ithere’s a fair amt of foot traffic and some other eating places to draw the locals.
We stopped there about 4 pm on a Monday to have either some appetizers or maybe a dinner depending on the menu..
There was someone sitting outside in a chair, the outside was empty, the front door was open. Sent my partner in to find out if they were open– because the menu in the case said zip.. and he was told that they weren’t open till 5 pm.
WHAT???????? I went there based on the 411 on their pages — hadn’t checked yelp at that point.– and to be told that it wasn’t open till 5 pm (Christy’s down the street is open at 4, ditto the pub a few doors down and every other food venue including Olives).. So what’s up with THE ATTIC? You lost a chance to get me to write about you in a positive way. Plus it was my birthday and I wanted to have an interesting meal.
Can we say disappointed is an understatement?

I wrote this specifically because I looked at the range of reviews and saw some great ones and an almost equal number of dissatisfied ones about service, food quality and quantity for the price. They have a select cocktail menu and beers plus they have an outside patio but it looks like they are a bit lacksadaisical in the service area– and that’s key for me.

Now you know wny I wanted to go out that day– it was my birthday and I certainly didn’t want to cook and given the number of new restaurants we wanted to try something new. So we jumped back in the car and we went downtown to a place where we had some appetizers in the course of a Tequila Tasting (blog post yet to come. It will be worth the read!) The restaurant is Agaves Kitchen Tequila. Turns out this one – despite the YELP descriptio of being open at 4:30- was not open at all and the doors were locked.

Now we wound up at Kings Fish House which is a vintage type place with a serious bar and great fish, but that wasn’t the place I really wanted to be. I wanted fun, hip, people and some music. But sometimes you make compromises especially when someone else decides he wants dinner and not small plates. (shaking head here) This was not the meal I had hoped to have. The food was good. I ordered a lunch portion because I wasn’t that hungry. I didn’t have a cocktail because by now I was too irritated to order one (maybe 3 but not one- but I was driving too)

However the best part of the whole thing is here in this photo:

This was the “free dessert”- key lime pie. Someone else got this because I wanted something different. It’s ripe, rich and distinctly key lime! No fakes in this one. As you can see someone couldn’t wait. (Not me, I have patience) 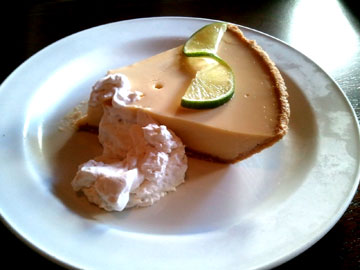 The best dessert was the Salted Caramel Ice Cream Sandwich. 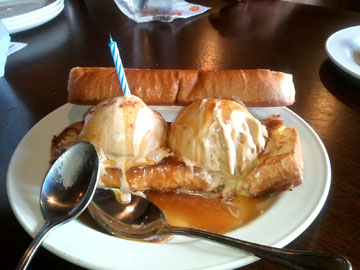 Birthday girl finally got something she wanted. I love salted caramel but this is unusual in presentation. A brioche roll split in half and toasted on the grill. TWO scoops of caramel ice cream with caramel sauce drizzle and a sprinkle of red sea salt. YUMMMY!!! So incredibly good – and as you can see in the photo, I hadn’t touched it yet. It was crispy, creamy, tasty, sweet and salty all at the same time. LOVED IT!! Plus the server was really great about making sure we had enough of everything. Service was great– and she wished me a happy birthday. Thanks to that dessert- mission accomplished!!

Kings Fish House, Pine & Broadway- check it out on my YELP reviews.

Sephora End of Summer Sale is going on now! Save up to 75% on select products. Hurry! These items are going fast!