Dan Godlin isn’t a name you have heard on the top 40 quite so much as other musicians. However he’s made not only a full CD and also an EP. He’s hitting the concert trail and video highway equally hard.! He was here in LA gearing up to play MusExpo in May when I caught up to him and got him on the phone for a conversation about life, music, touring, writing new tunes and lots more. 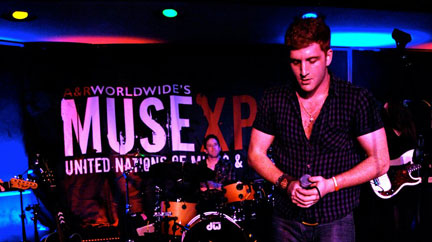 While bouncing around campuses across the country, including a brief stint at UCLA and final semesters at NYU, Godlin recorded his first album, Loving on Empty.
The full debut album of 13 self-written songs revolves around the uncertainty of young love and the rollercoaster of a good-guy’s mix of frustration and compassion. In March 2011, his debut single “My Hurricane” broke the Top 200 Hot Adult Contemporary Charts. The following year his upbeat, sing-along single “Did She Look” hit number 3 on Channel One’s iHeart Radio’s New!, and Dan was named Channel One’s Artist of the Month as well as nominated for 2012 Artist of the Year.

Godlin’s brand new EP, In Between, puts romance on the back burner. Co-written and produced by Jim McGorman and Robb Vallier in late 2012, Dan refers to the collection of five songs as a “concept album” revolving around the quarter life crisis and a generation struggling with the dichotomy between actual reality and the “follow your heart” fairytale it was raised to believe. The unique sounds and lyrics on this EP reveal a more mature Godlin, an earnest artist described in a Bloginity.com profile as:

His latest single from the EP just dropped 2 days ago: Summer Roads


Since the conversation, Godlin’s been burning up the music space in lots of channels:
3 of his songs were aired on “Keeping Up with the Kardashians“;
Dan’s music is being played on American Airlines in-flight pop music station.
Godlin opened up for Howie Day in Natick, MA on July 27th
and is opening at the House of Blues Chicago on August 16th–supporting Tyler Hilton and Ryan Cabrera.

Here’s a good description of Dan Godlin who deftly fielded my questions despite any nerves he might have had due to rehearsals for MusExpo here. He’s got his head on straight, not taking anything but the music too seriously and willing to go “all out” for his career path.

…a 23 year old dreamer who croons like Jason Mraz, hugs like a best friend and embodies a magnetic, good-guy charm reminiscent of a male version of Taylor Swift…


While I couldn’t be there for the MusExpo performance, here it is on video from Youtube.com

This is a musician to keep your eyeball on. Very much like GooGoo Dolls and The Fray yet as a solo act, he’s got lots of potential to create his own vision, direction and persona.
Fun and amusing, he can be very serious too about the things that are important to him.

DO follow him on all the usual places. BUY his CD’s- the newest one shows significant progression from the first. Loved it!
Thanks to Dan GOdlin for all the time!