Home » The Rise and Fall of Celebrities: 3 who OverSpent! Guest Post by Michael Juba.

The Rise and Fall of Celebrities: 3 who OverSpent! Guest Post by Michael Juba.

Think celebrities have it all? Well some manage to deal with their success in appropriate ways. There are others who haven’t managed to learn that skill set or how to stick to a budget. Delayed gratification are two important words to learn as well as what it means in real life. That said, here is a guest post courtesy of Michael Juba of EZSolution.com

The Rise and Fall of Celebrities

With the Oscar’s right around the corner, it’s a good time to talk about some celebrities. Bradley Cooper should be mentioned a lot on February 22, it won’t be because of hard times with finances. As a matter of fact, it’s quite the opposite.

Bradley Cooper Paying Off His Friends' Debts… by revnewmedia

While Bradley Cooper has been helping to pay off his friend’s debt, some celebrities out there have been having trouble paying off their own. They all have different reasons for their misfortunes, but most of which stem from overspending and living the lavish lifestyle that their bank accounts couldn’t keep up with.Now some of them are left to constantly push out movies that they probably wouldn’t have done if they weren’t in debt…
Here’s looking at you Mr. Cage.

Let’s dive into some celebrity stories that you may or may not have heard about. Of course when you tune into the Oscar’s you won’t be hearing any of these names, but they’ll surely be tuning in wishing they made some better decisions throughout their career. 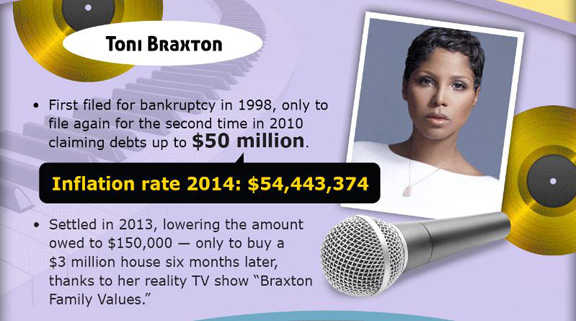 First off, we have Toni Braxton, the woman with the voice of an angel. Currently she has a net worth of $10 million thanks to her reality TV show Braxton Family Values. However, not all has been so well for her. In 1998, she filed for bankruptcy claiming a debt of $5 million. Her album “The Heat” helped in getting her out of trouble in 2000. But then again, in 2010, she filed for bankruptcy at an astounding $50 million in debt. According to TMZ, she was to pay back $150,000 to wipe her $50 million slate clean, which if you are a celebrity sounds about right. For the rest of us common folk it leaves you to scratch your head a little. She was to pay $5000 a month for 15 months and then the last payment was to be $50,000. She paid all back, except for the last payment of $50k.Just months later after settling her debt (which she paid about .3% back); she bought a house in California for about $3 million. Where that money was when the debt was being collected is that question on a lot of peoples’ minds.

Chris Tucker, known for his extremely successful Rush Hour movies with Jackie Chang made a good chunk of change from the Rush Hour series. Since Rush Hour 3 his acting career took a bit of a dip as he didn’t get another role until 2012 in Silver Linings Playbook (starring the aforementioned Bradley Cooper). Even though the jobs stopped coming in for him his spending did not stop. He amassed an $11 million debt owed to the IRS in 2012, along with a bank foreclosure on his home that he owed $4.4 million for. Luckily for him, it was announced in 2012 that Rush Hour 4 was in the works, but Jackie Chan said in 2014 that he is still waiting for a good script for them to start shooting. 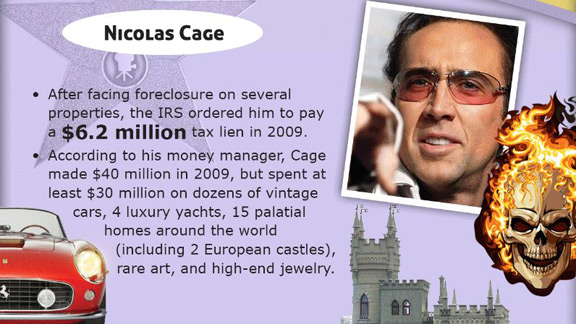 Lastly, there is Nicolas Cage, who won an Oscar for his performance in Leaving Las Vegas. Since then he has pummeled out 2-3 movies a year, some good, and some not so good. He apparently has no desire to win another Oscar, but our take on it is that he’s pumping out these movies to pay off his debt. In 2011, he was in five movies, four of which most of us have never heard of. The one you may recognize is Ghost Rider, but you probably never saw it either. His 2011 movie spree was probably due to the $6+ million the IRS ordered him to pay back in 2009. His money manager said that he made $40 million that year, only to spend $30 million of
it on vintage cars, yachts, homes, castles and more.

Hopefully, the up and coming celebrities can see the mistakes that these stars have made and learn from them so they don’t end up with this celebrity debt . While it’s great to make a ton of money and reward yourself, as they deserve, there’s a rhyme to reason in that you should live within your means and never forget where you came from.

Michael Juba is a content marketer and writer for design and marketing agency, EZSolution. There is no harm intended on these celebrities and that they make it back to the top where they once were and should be. Admittedly he would be in the same hole they are in if he had the kind of money they made, but wishes the best for them and the rest of these celebrities.

Thanks to Michael Juba for this very timely post.