I am a huge fan of the Outlander series-– both book and TV show. I read at least 4 of the 8 books (and got stopped by “life happening). It was just crazy great and Diana Gabaldon had such a great way with interweaving history. 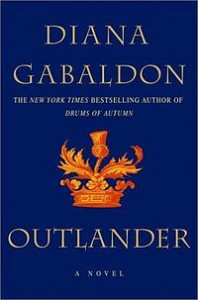 WHAT:
Visit A Tartan Affair at The Grove Los Angeles and transport back in time to the Scottish Highlands.
Featuring everything from custom-designed Scottish Plaids to British Redcoats, the special exhibit will include costumes from the first season of the acclaimed Starz Original Series “Outlander” designed by Costume Designer Terry Dresbach.
Free and open to the public, the exhibit will be displayed at various locations within the outdoor mall. 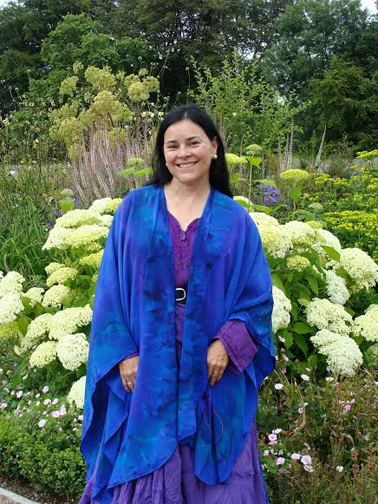 See Author Diana Gabaldon for a very special in-store appearance and Q&A about “Outlander” (her best-selling 8-book series) at the Barnes & Noble at The Grove.
Sunday, May 31, 2015 at 2 PM

The exhibit will feature:

“It was important that we conveyed the seriousness and somber tones of Britain just after the war and the men who fought in it. We chose somber and conservative British wool and traditional tailoring. His suits were designed according to pre-war fashion, most men in 1947, coming out of uniform for the first time in many years.” — Costume Designer Terry Dresbach

“We wanted Claire’s costumes to reflect the hope and optimism of a new marriage, the end of a long war, and a new beginning for her life and her country. Fabric was still rationed in post war Britain, so her costumes were made to the standards set by the British Government.” – Costume Designer Terry Dresbach

“The Clan’s War Chieftain needed powerful, dashing and menacing costumes. We wanted to convey that he is the leader of his men, and should be feared. We call him “Our Darth Vader.” Always in black.” — Costume Designer Terry Dresbach 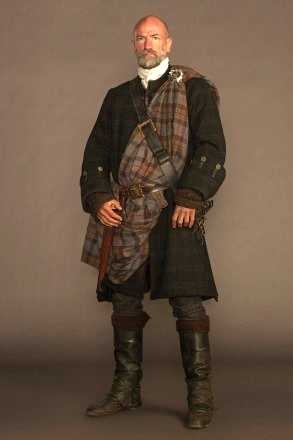 “We called this ‘the Raven dress’ in the costume department, as it looked like a million black raven feathers.” – Costume Designer Terry Dresbach 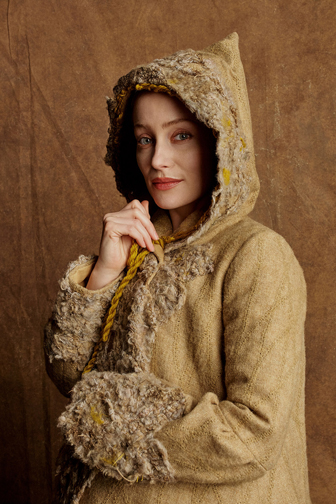 “Ron scribbled this piece of dialogue out one day, and it told me everything about what the wedding dress needed to accomplish: ‘I remember every moment. Every second. I’ll never forget when I came out of the church and saw you for the first time. It was as if I’d stepped outside on a cloudy day, and suddenly the sun came out. ‘– Jamie Fraser.” 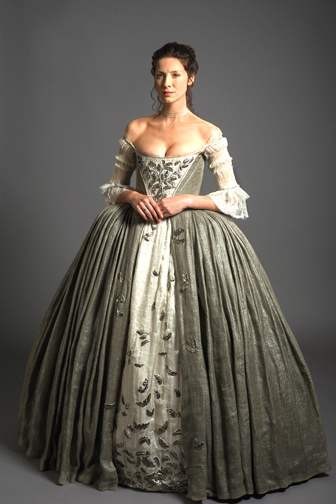 The dress is made of silvered jute linen, with very fine cartridge pleating. The stomacher and petticoat is a silk/linen weave, covered in 450 hand embroidered silver plate acorns and leaves, and one silver dog bone. Layered behind the petticoat and stomacher is another layer of silk cover in hand slivered mica shards, to create an organic shimmer effect.” — Costume Designer Terry Dresbach

Under the dress details:
· Wool/Silk chemise

“James Alexander Malcolm Mackenzie Fraser needed to be, above all else, resplendent in borrowed finery.” – Costume Designer Terry Dresbach 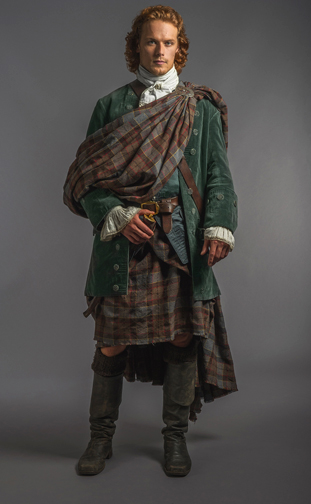 5. Geillis Duncan, Episode 103, “The Way Out”
“We named this costume the ‘monkey jacket.’ It looks like a strange animal skin. Lotte Verbeek turned it backwards in the fitting, so the felt looks like a furry spine.” — Costume Designer Terry Dresbach 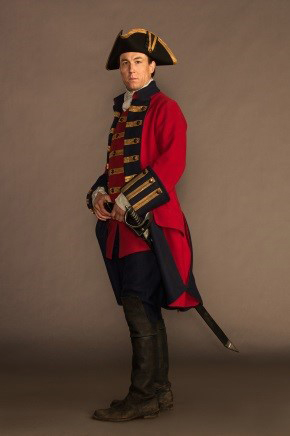 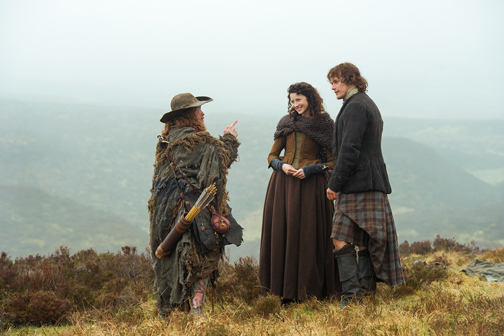 “I was driving through the Scottish countryside one day and a large fir branch had fallen across the road. It was beautiful tones of silver grey bark and green needles. It was the inspiration for this gown.” — Costume Designer Terry Dresbach

“We wanted Jamie and our Highlanders to reflect the Scottish landscape and to appear as if they had grown up from the earth. Jamie in particular had to be truly as representative as possible of Scotland, and the Highland culture of the 18th century.” — Costume Designer Terry Dresbach

Details
· 14-foot-long kilt made of brown/tan/blue-grey check, designed as our Outlander Tartan

Outlander Costume Facts: Did you know?

· The Outlander costume department made 122 costumes in five weeks while prepping Season 1, and many hundreds more after that.

· Original Tartan plaids would have been passed from generation to generation starting as a kilt or a coat, before being made into a waistcoat and then a scarf or shawl as it was passed down.

· The highly colored clan tartans were mainly a Victorian invention; the actual Highlanders of the 18th-century would have probably worn much more subdued naturally dyed colors.

· Simple things in nature often inspired the looks behind the outfits. Outlander Costumes were inspired by the landscape that Costume Designer Terry Dresbach experienced upon arriving in Scotland.

· Once recreations of period costumes are made, the ageing and dyeing team attacks them with cheese graters, blowtorches, dyes, paints, sandpaper, and pumice stones to create a worn, lived in look.

· Costumes are placed in a specially created hot room in the studio where wet clothes are twisted and tied with string, then baked to age and shape them into worn clothing.

· British soldiers’ red coats are burned with a blowtorch to create the effects of war and gunpowder.

“Outlander” spans the genres of romance, science fiction, history, and adventure as it follows Claire Randall, a married WWII combat nurse who mistakenly falls back in time to 1743. As the season continues, Claire and Jamie’s relationship is tested and Claire must reconcile her modern mindset with this 18th century world. Ruthless redcoats, volatile clan politics, and a brutal witch trial force Jamie and Claire to escape to a new home. Just when their life as a married couple begins to take shape, Jamie is once again drawn into Captain Randall’s darkness.
Ultimately, Claire discovers there is a fate worse than death as she struggles to save Jamie’s heart, as well as his soul.

“Outlander” is produced by Tall Ship Productions, Story Mining & Supply Company and Left Bank Pictures in association with Sony Pictures Television.
Starz retains all domestic multiplatform pay TV rights to the original series which has been greenlit for a second season.