Get the Best from Thanksgiving Dinner + the Left-overs with Woodbridge by Robert Mondavi Recipes!

Home » Get the Best from Thanksgiving Dinner + the Left-overs with Woodbridge by Robert Mondavi Recipes!

Looking for interesting recipes for Thanksgiving leftovers? I have several to share with you today, courtesy of Woodbridge by Robert Mondavi!

Thanksgiving is all about the big meal with tons of food and drinks — until you push your chair back after it’s all over and realize you have a lot of food ‘left-over’. If you are like me, you send people home with as much food as you can so that you don’t have to keep all of it in your frig. Well after you check out these recipes, you might rethink sharing 50+ % of your left-overs from Thanksgiving because these recipes look amazing. Everything looks really tasty and the presentation show off food I definitely would want to eat! 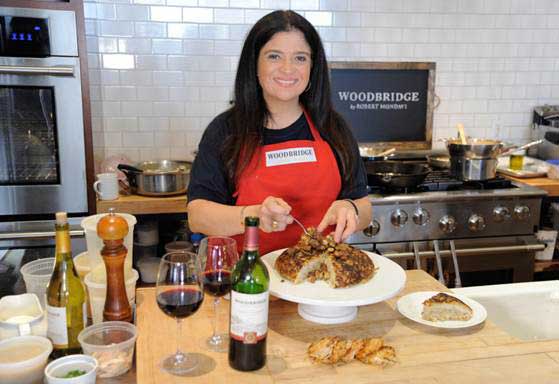 1. The Woodbridge by Robert Mondavi Chardonnay is wonderful with the varied flavors of sweet potatoes, green bean casserole and the white meat of the turkey with gravy. For the heartier dishes, like stuffing, cranberry sauce, mashed potatoes and the dark meat of the turkey with gravy, Woodbridge by Robert Mondavi Cabernet Sauvignon is the way to go.

2. Stir a splash of white wine, like Woodbridge by Robert Mondavi Chardonnay, into your gravy to wake it up and take it from “leftover” to “brand new.” Simmer on the stove for a few minutes and serve – the wine will give it brightness and acidity.

3. You can make a vegetarian leftover dish by layering a few of your side dishes on top of one another and baking it like a “leftover lasagna”. For example, a layer of mashed sweet potatoes topped with a layer of green bean casserole and a layer of mashed potatoes and baked with some grated Parmesan cheese on top. 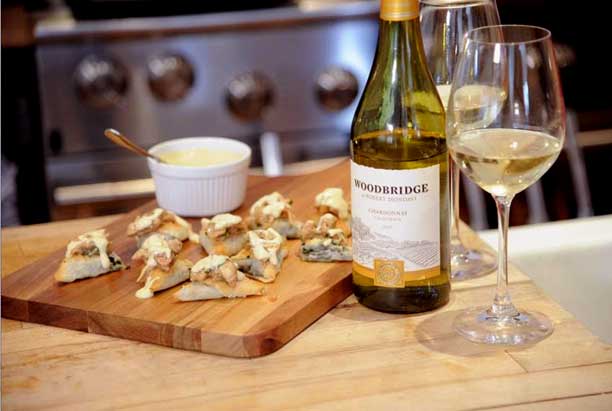 1. Preheat oven to 400 F.
2. Make the filling: In a medium-size skillet, heat the butter and add the turkey meat. Cook over medium heat, stirring with a wooden spoon, for 3-5 minutes or until the turkey is warm. Stir in the gravy and cook until the gravy coats the meat, an additional 3-5 minutes.
3. Bake and serve: Arrange the spinach and phyllo appetizers in a single layer on a baking sheet and place in the center of the oven. Bake until they are golden brown, an average of 12-15 minutes. Turn the phyllo out onto a platter and arrange in a single layer. Stir the parsley into the turkey and arrange a generous spoonful on top of each phyllo triangle. Serve immediately with the warm fondue sauce for drizzling and dunking.

1. Reduce the wine: In a medium pot, reduce the Woodbridge by Robert Mondavi Chardonnay over medium heat until the liquid measures about ½ cup, 5-8 minutes.
2. Make the fondue sauce: In the same pot, add the cream and the mustard to a simmer gently with a pinch of salt. Using a wooden spoon, stir in the Swiss cheese, parmesan, Worcestershire and Tabasco and continue stirring until cheese melts. Taste for seasoning. 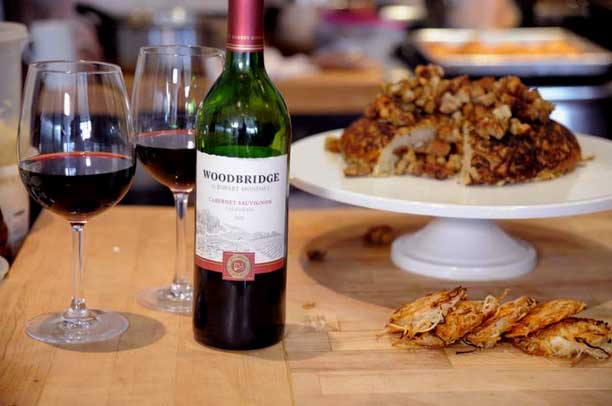 1. Preheat the oven to 350 F.
2. Make the sauce: In a medium pot, reduce the Woodbridge by Robert Mondavi Cabernet Sauvignon until about ½ cup liquid remains. Transfer to a medium bowl. Whisk in mustard, red wine vinegar and olive oil with a pinch salt.
3. Make the vegetable mix: Use the largest size holes on a box grater, the “teeth” of a mandolin or a food processor attachment to shred the potatoes, rutabaga and celery root. Toss them in ½ cup of the butter and the garlic and season with salt. You should have about 4 cups of grated vegetables.
4. Cook the vegetable cake: In a 9-inch nonstick skillet, heat the remaining butter over medium heat. Remove skillet from the stove and fill halfway with vegetables. Top with a layer of mashed potatoes. Top with remaining vegetables. Skillet will likely be overfilled. Put the skillet back on the stove and cook over high heat until the edges of the underside brown, 5-8 minutes.
5. Finish cooking and serve: Spread the stuffing in a thin layer on a baking sheet and place in the center of the oven. Place the skillet on another baking sheet in the oven and cook until tender when pierced in the center with the tip of a knife, 25-30 minutes. Remove both from the oven. Drain excess butter. Season with salt. Place a 12-inch round platter over the skillet and turn the cake out on its second side onto the platter. Cut into 8-10 wedges. Top with all of the stuffing. Serve immediately with sauce. 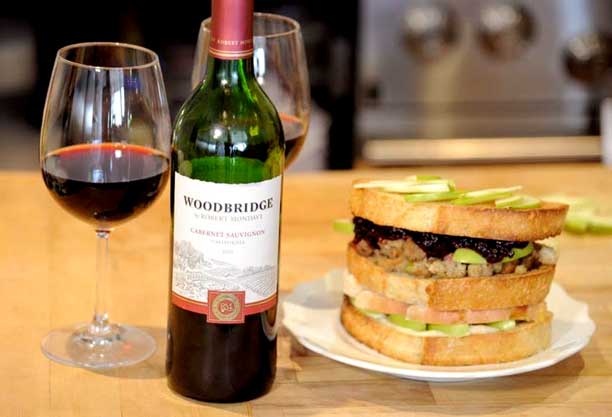 1. Make the Woodbridge by Robert Mondavi Cabernet Sauvignon reduction and cranberry sauce: In a small pot, reduce the wine over medium low heat until only about 1/3 of a cup of liquid remains. The liquid should be syrupy in consistency. Refrigerate to cool. When cool, stir the Woodbridge by Robert Mondavi Cabernet Sauvignon into your leftover cranberry sauce.
2. Build the sandwiches: On a flat surface, spread some mayonnaise and apple slices on two slices of the bread. Top with some layers of turkey. Top each with another slice of toast. Layer some of the stuffing, a few apple slices and some of the cranberry sauce. Drizzle with dressing, the remaining turkey and remaining stuffing. Top with remaining cranberry sauce and the last two slices of bread. Press down on the sandwiches. Use a serrated knife to cut the sandwiches in half.
Pair with Woodbridge by Robert Mondavi Cabernet

This is the perfect way to “re-purpose” pumpkin pie! 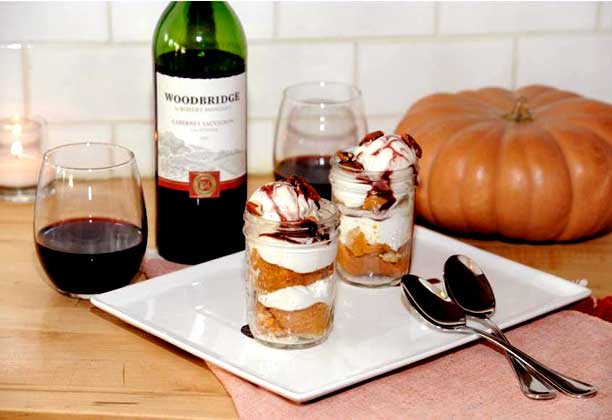 1. Make the Woodbridge by Robert Mondavi Cabernet Sauvignon caramel: In a medium pot, reduce the Woodbridge by Robert Mondavi Cabernet Sauvignon over medium heat until there is about ½ cup of liquid remaining. Gently whisk in the caramel sauce until combined. Refrigerate until cold and drizzle over the ice cream. Do not stir. Freeze.
2. Make the parfait: Spoon some of the pie into the parfait glasses. Top with a layer of whipped cream. Top with another layer of pie and another layer of cream. The glasses should be about ¾ full. When ready to serve, top with some of the nuts and spoon the ice cream on top. Serve immediately.

You should have a fun time making these recipes. They sound decadent and yet delightfully presented as not so much “leftover” but deliberately creative!!

Have a delicious  Thanksgiving!!

If you are going to feature content from LA-Story.com including images, podcasts or videos including the accompanying text, please respect copyright provisions. We require a notation of content origination (meaning credit tag), a linkback to the specific page & please email the link to stevie@la-story.com before the piece goes live. LA-Story.com, LA-Story Recessionista, Celebrity Stylescope, Celebrity Style Slam Trademark/Copyri