Dennis Stokely, Celebrity Hair Stylist (and beauty editor for LA-Story!) is back to share his picks for Best Hair for Oscars 2017. 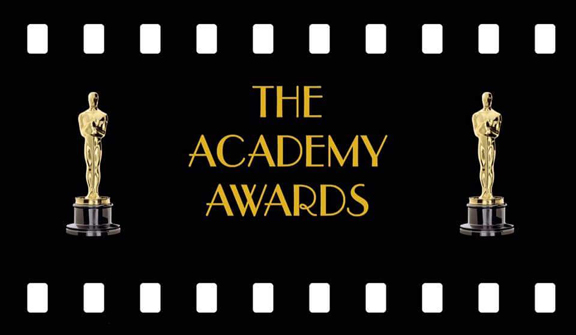 From Afro-chic to sophisticated and sleek, Hollywood’s leading ladies skewed all things glam with hairstyles that will become insta-hits with it-girls
around the world! 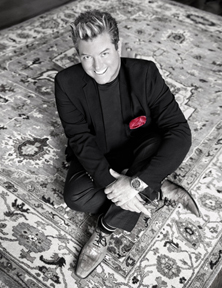 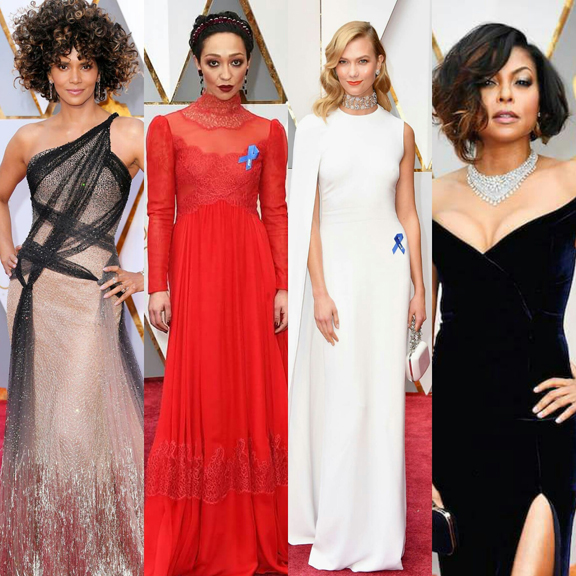 My yearly pick of the “Winners” and “Runner-Up” from the red-carpet at the Oscars is the Super Bowl of my hairstyling year!

I remember working on AMERICAN IDOL as Paula Abdul’s hairstylist and it always gave me chills knowing that the hair styles I created would be seen worldwide. Nothing has more impact on the fashion scene than the head-to-toe styling of the most talented actresses on earth. The Oscars are now seen LIVE in over 200 countries and viewed by over a billion people. In the world of real-time everything, the influence of hair, makeup, jewels and gowns from a red-carpet look will have wanna-be starlets from Serbia to South Africa booking salon appointments pronto!

In the spirit of my longtime quote, “I have always been mesmerized by gorgeous hairstyles,” here is my take on all things HAIR & STYLE at this year’s Oscars! 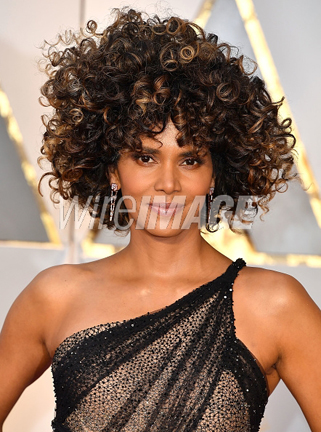 Halle was quoted as saying her longtime stylist, Lindsay Flores, was her “secret weapon” in their collaboration creating this look. Well, they have worked together for 15 years and this could be their best work EVER! I always reference Halle as my favorite short-hair vixen, but this spectacular afro (most likely a $10k wig) is perfection. 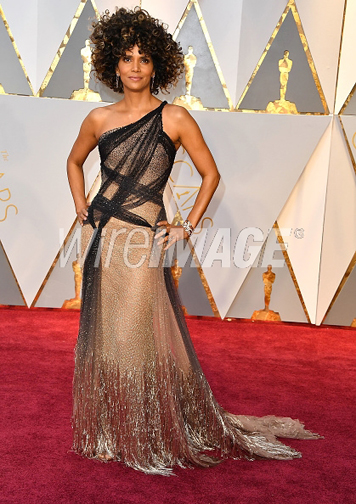 The haircut exposes her neck and the subtle ombre of the highlights work flawlessly with her skin tone and the gold, nude and black tones ofher Atelier Versace gown. This look makes my all-time favorite list, too! 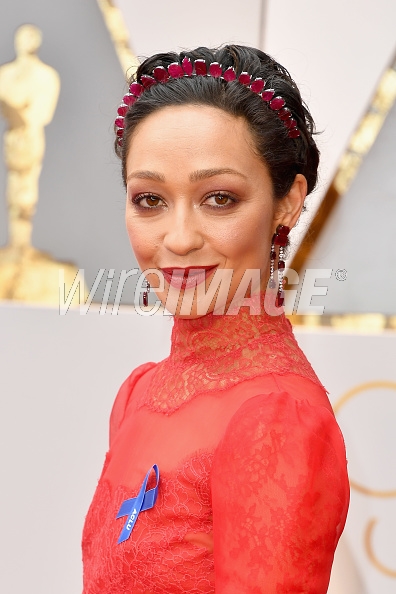 Ruth has burst onto the acting and fashion scenes in recent years to rave reviews. When I was watching the red-carpet arrival, I got a Facebook message from LA-STORY publisher/editor, Stevie Wilson, asking my thoughts on Ruth. Before I could respond, Stevie sent another message, “she has serious style.” Stevie is right! Rarely does a young actress get it so right on the red carpet so quickly. No “worst dressed” list mentions for this fashionista. 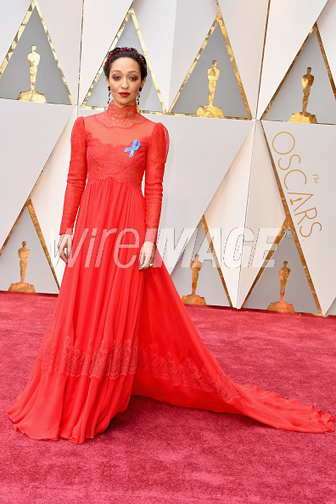 Her jeweled headband, simple updo and the exquisite red Valentino gown reek of old-Hollywood with a youthful and modern vibe. 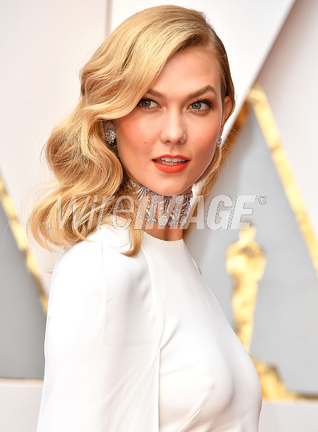 WOW! I have never thought that supermodels look as good on the red carpet as they do on the runway! Well, enter Karlie Kloss!
There is a Doris Day meets Christie Brinkley air about her wearing this white Stella McCartney gown and her dazzling jewels from Nirav Modi. Her often attempted (not-so-often-achieved) Veronica Lake-inspired hairstyle is wonderfully executed. Karlie is one of very few models that own the red-carpet as equally as they shred the runway. This look is the best example I can remember that combines a New York model look (runway) with Los Angeles celebrity look (red-carpet). 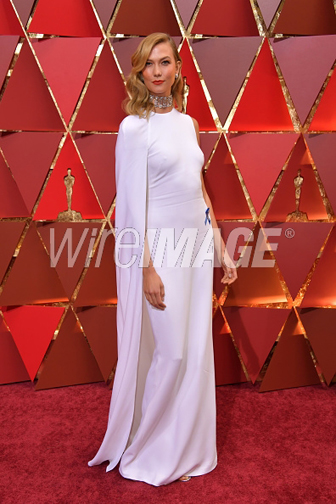 To prove the power of her celebrity reach, she made a political statement when she accessorized her white gown with a distinctive blue ACLU ribbon, worn in protest of President Trump’s travel ban. 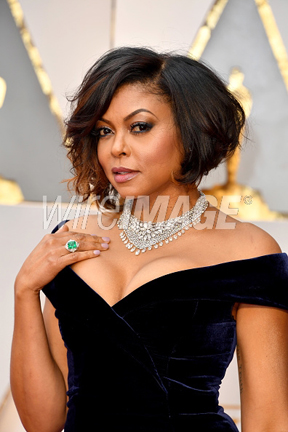 Taraji has been a big “HIT” on the red-carpet for several seasons! But, this simple black custom Alberta Ferritti gown stuns! Her softly pinned under bob hairstyle with a very loose side part, lots of volume at the bottom and no height in the crown creates a Hollywood siren silhouette. The bib of diamonds, small black clutch and feminine strapped shoes are pullbacks from her powerhouse presence. 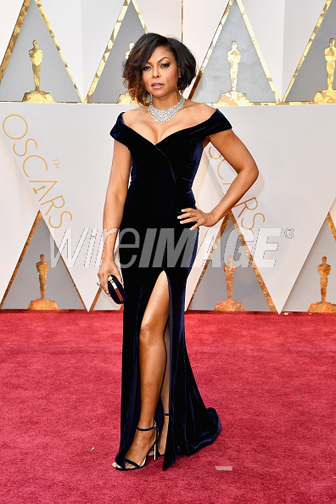 So many women that I work with go with a black dress/gown for special occasions. This image of Taraji should be the holy grail of the right way to wear black! 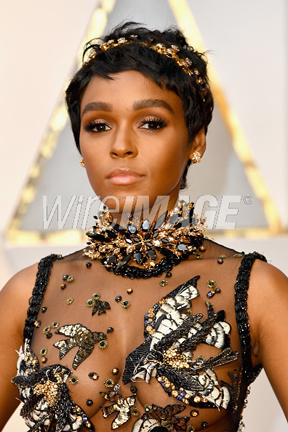 Janelle always rocks a quirky look on the red-carpet and this Elie Saab confection of a gown does not interrupt that trend. However, this dress is a bit too much of a look – the nude cut-outs, big belt, poof skirt and intricate pattern of the fabric are
just too much to take in. Her hair seems like an after thought and it would be barely noticed without the oddly placed headband. Her longtime stylist, Maeve Reilly, was quoted by WWD (Women’s Wear Daily) as saying, “Could it be? Could it work?” when he first saw the dress. 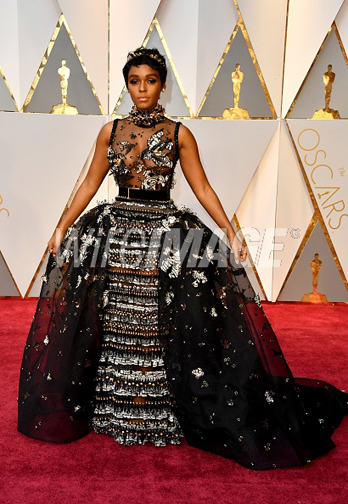 If there is an immediate hesitation from the first look of a dress, I say move on. Janelle has cemented her place as an uber-talented actress and I am sure we will see some amazing looks on her for years to come!

And there you have it, my two-cents on HAIR & STYLE from the 89th Annual Academy Awards! 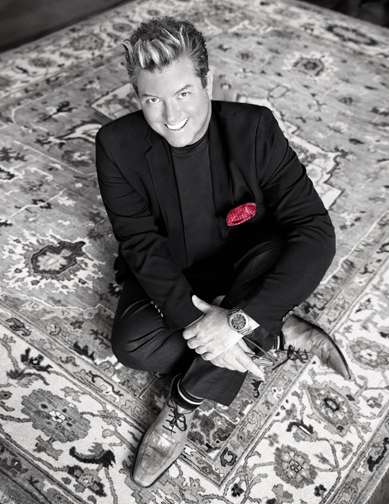 “I will be making a guest appearance at the International Beauty Show (IBS New York) at the Javits Center in Manhattan on Monday March 13, 3pm-5pm. I will be cutting hair with my signature scissors, DENNIS STOKELY celeberity shears.”

Wow! I think Dennis Stokely outdid himself on this piece. I love his insight and thoughtful eye towards what constitutes new hairstyles as well as retro styles and how they work in terms of completing a fashion look that is a statement! I hope you enjoy his great piece and I am hoping we can get another piece from him for spring!

If you are going to feature content from LA-Story.com including images, podcasts or videos including the accompanying text, please respect copyright provisions. We require a notation of content origination (meaning credit tag), a linkback to the specific page & please email the link to stevie@la-story.com before the piece goes live. LA-Story.com, LA-Story Recessionista