Hollywood’s Most Sought-After Party Crasher Hits Up
BOOK SOUP for a Reading of His Comedic Memoir! 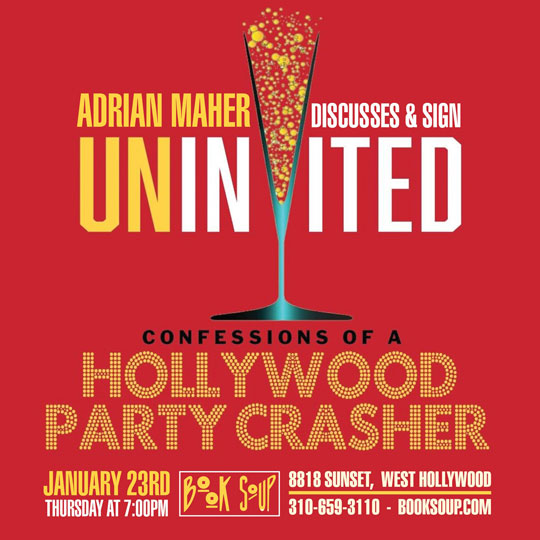 WHAT:
Former LA Times reporter Adrian Maher will tell tales of his hilarious celebrity run-ins as an undercover observer, along with risky crasher tactics and more from his new comedic memoir, Uninvited: Confessions of a Hollywood Party Crasher (Chicago Review Press).  He is likely to spice up anecdotes about his encounters with Clint, Cate, Arnold, Gwyneth, McCartney, Yoko, Jane Fonda and Jennifer Aniston with some of the 25 accents and celebrity impressions he performs in the audiobook version.

His uproarious stories culled from 20 years’ experience as an A-List-event interloper and social anthropologist make Uninvited a raucous everyman’s journey behind the palace gates. It’s an exploration of the bizarre subculture of Hollywood’s party crasher network and a heartfelt personal story centered on the universal need to belong. 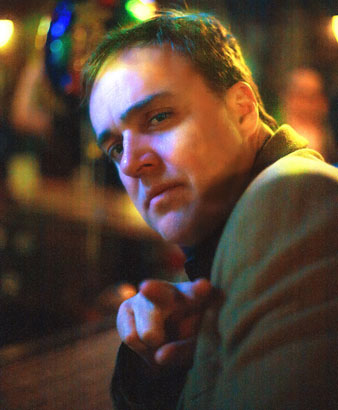 Who is Adrian Maher?

A former newspaperman, broadcast journalist, Adrian Maher is now a prolific documentary filmmaker. He is an adept, witty and vivid storyteller in person.

Free one-hour parking behind the store via Nellas St., and there are a number of pay lots in the neighborhood, and metered parking on Sunset Blvd.

“Aided by a Halloween gallery of fellow rogues and adrenaline junkies, Adrian Maher takes us on a joyous romp through backstage Hollywood dodging security, public relations flacks, and… face to face with Clint, Hef, Arianna, and the rest of Tinseltown’s high and mighty. Deliciously subversive.”

Uninvited: Confessions of a Hollywood Party Crasher is a fascinating comedic memoir by an ex-journalist feeling adrift after industry-wide layoffs who goes undercover with a colorful network of eccentric gatecrashers who insert themselves nightly into Hollywood’s most exclusive social events. It’s a never-before-told tale of a deeply entrenched group of adventurers, poseurs and adrenaline junkies and their outrageous antics and encounters with the rich and famous. Uninvited brims with insider stories of harrowing side-door entrances, infiltrator tools and tactics, imposters, and surreal backstage interactions with celebs.

Adrian Maher was a reporter for the Los Angeles Times and a freelance journalist for UPI, Newsweek, Time Magazine and the L.A. Weekly. He has written, directed, and produced dozens of programs for such television networks as Discovery, History, National Geographic, ABC, Fox, Travel and MSNBC. Maher has also taught investigative journalism and documentary film production as an adjunct professor at Chapman University. He holds a Bachelor of Arts degree in English Literature from the University of California at Berkeley and a Master of Science degree from Columbia University’s Graduate School of Journalism. He lives in Santa Monica, CA.

This book signing & reading is definitely a hot ticket as we get closer to the Oscars! Adrian is a hoot and he’s going to really captivate you with his readings!