Home » Tech Talk: Create Your Own App on Appsbar.com in about 60 Minutes –for Free!

Tech Talk: Create Your Own App on Appsbar.com in about 60 Minutes –for Free!

As digital engagement spreads from the web (Facebook, Twitter, websites) to smart phones and tablets, apps have become a critical factor to gain user attention by providing a function, service or information. It’s more than the icing on these devices that we buy and use. With the smartphone/tablet dimension, apps are embedded into the user experience landscape as serious, useful and fun additions to their device. Often the availability of the apps to improve the function of the devices from phones to tablets and the variety of apps available make the choice of host product purchase a real effort in research prior to purchase.

There are a few key few issues concerning the app marketplace. First is the exclusivity of an app to a particular platform. Often your favorite iPhone app is not available on Android or Windows or tablet platforms. Cost is an issue. While there are a number of apps in the free to three dollar range, there are apps with premium prices ranging from five to twenty dollars. The third issue is that perhaps the app or function you want or need is not currently available or doesn’t function in the way you need. I heard of a woman who wanted a “mirror” app so that she could see what she looked like on the fly– but she couldn’t figure out where to find that app.

Should you be so entrepreneurial as to want to create an app, you have a few choices. If you were smart enough to get into IT when in college or are taking classes for that, you know where you can make extra bucks — creating apps on the side. If you are a “geek freak”, you could dig into this as a DIY project and buy the books to create an app yourself. Or if you are like the rest of us (especially moi), you could hire a programmer and find out what it will cost. The price tag– even on the bargain end can be about $3000. Most of the pro apps cost about $10,000 and can cost up to $100,000 or more depending on the sophistication of the app. The time frame for app development can range from six weeks to three months. Until now, these were the only options you had.

The apps paradigm has shifted courtesy of Appsbar.com, an open-to-all-ages website that offers members the ability to quickly and easily build an app for a specific platform with lots of bells and whistles in about 30-60 minutes– and it’s free! Plus once you create the app, it’s funneled to the Apple, Android or Windows markets for others to download. It’s a win-win proposition. In a little more than 2 weeks since the site launched, eleven thousand apps have been created. 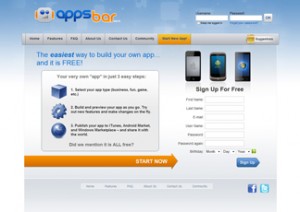 Appsbar.com is a new website that allows anyone of almost any age to build their own app on a variety of platforms including iPhone, Android and Windows and also get them into their respective markets. The “digital engagement” that appsbar.com provides allows you — as the user– to create the app for anything or everything you want– depending on how much time and creativity you bring to the table. Generally speaking, if you are thinking about a relatively simple app to build, it could be done in about 30 minutes. The more complex you want to make it, the longer it will take– 60 minutes is about the baseline. However if you get really creative and want the veritable kitchen sink, it could take longer. 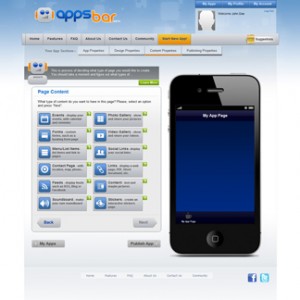 Here’s what the site (and their press release) says you can create on an appsbar app
•Event Notifier – which delivers real-time or scheduled notifications to app users.
•Menu – allows creating of catalog of products or services.
•Form Builder – which can be used for customer service surveys, a restaurant to-go order, or answers to questions asked through the app.
•Social Interaction – adds the ability to share content within an app across social networks such as LinkedIn, Twitter and Facebook.
•Soundboard – lets users create a unique “app ringtone” by uploading any sound which can play when a user shakes or taps their mobile device.
In addition, appsbar can also handle RSS, photos and videos like other similar services 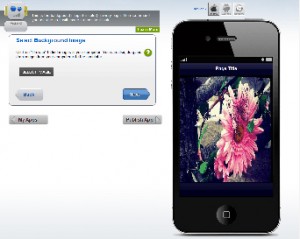 This isn’t just for play boys and girls. This is serious business masquerading behind a fun game-like wizard that will be blowing away the competition in a very short time. As the community grows, watch what happens as the members connect, communicate and collaborate. It’s bound to create something exponentially better than anything out there..

I was able to snag an interview with CEO/founder Scott Hirsch to talk about this new site and honestly- to ask a lot of questions because appsbar.com is as big a shift in paradigm in the app world as iPhone was to cell phones. Flat out truth, appsbar is on its’ way to changing the perspective of the marketplace and how apps are created and how much the public wants to be involved in the creation. So far there has been little public involvement until now because the public had no way to get involved in the interface of building an app. Hirsch and company have remedied that situation.
How?
1) it’s free
2) they created a very simple wizard to walk you through the building process so that anyone from 18 to 70+ can create their own app.
3) the collective imagination of the appsbar user community is creating new processes for and ways to create apps and the appsbar team is learning from that collective imagination just how to integrate or improve upon what the users have created or asked for to facilitate the building of the most customized app around at the phenomenal price of free plus your own time. 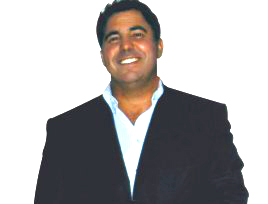 I had the opportunity to interview CEO Scott Hirsch about Appsbar.com and ask a slew of questions about the site– and app development; questions about funding, advertising and how long the site will remain free. The podcast provides answers to all these questions.

I tried the Appsbar.com wizard to create an Android app for my blog. The app creation wizard is easy to use and it’s a lot more fun than a Zynga game. Pick your platform and get started. Do realize that after you complete the first version of your app, you will want to upgrade it as you figure out all the options that you can add to the app and how to make sure that it integrates with your goal.

The community of members can share information and also ask for additional features (coupons, discounting capacity) and the Appsbar.com team will start working on it. While it’s taken me a little longer than the hour, it’s because I kept changing the visuals, the essential app is easily done in 60 minutes or less and I took longer because as I saw the options come up, I was playing with the integration of those options into the app. In other words, I was throwing the kitchen sink into the app and it was definitely fun. Check out the site www.appsbar.com

Thank you to Scott Hirsch of Appsbar.com and Joe McGurk/ Rubenstein PR for facilitating this interview which literally was done in 3 days.

Article first published as Tech Talk: Create Your Own App in About 60 Minutes with Appsbar.com – for Free!! on Blogcritics.

Korres blush for $10 each. Choose one of four different shades. A $24 Value. No code needed.

Designer Brands At Exclusive Prices – Save Up To 70% Off Retail! Invitation Code: SPRING2011