Home » Hot Movies and DVDs To Watch: The Debt, Drive, The Tempest & MORE!

Hot Movies and DVDs To Watch: The Debt, Drive, The Tempest & MORE!

This was a big summer for movies. Typically I don’t watch a lot of movies but ever since HURT LOCKER hit theaters, I have been on a binge seeing things in theaters since the big screen makes a huge difference in the personal experience of movies. Not that big screen TVs & Blu-ray aren’t great (I live and die by mine), but some movies really need the big screen to “breathe” the life that they contain in their presentation.

The first movie that I wanted to talk about was Drive.Starring Ryan Gosling, Carey Mulligan, Bryan Cranston, Christina Hendricks and an amazing cast, this is film noir at its finest– using the car as a symbol ; as a cocoon in which talking doesn’t really occur– but communication is done through glances and feelings. There is the dichotomy of day versus night, light versus dark, and it differs between Gosling and Mulligan in personal temperament where Gosling is the loner: he really doesn’t talk; his words are few and far between.

Mulligan on the other hand, is a mother of a young boy whose husband is in prison and about to get out, She’s been trying to make the best out of the situation and finds herself attracted to Gosling’s character because he seems to be so in charge. He seems to be unafraid and he doesn’t want anything from her. The thrust of the movie is based on a series of other characters who all seem to talk too much– and mostly about themselves. That is the point of the movie. All but the 2 main characters have an agenda each has their own agenda and can’t imagine that someone would not want something from them or to rob or steal from them. The various characters are interesting and they provide a backdrop against which Mulligan and Gosling contrast.

The jist of the plot is that the husband gets out of prison and he finds that he owes the mob protection money for when he was in prison. The tally keeps getting higher on a daily basis and the only way out is for him to rob a pawn shop. Gosling’s character offers to help for no fee; he wants nothing but to make sure that Mulligan’s character and her son are safe. The plot line is alternately solemnly quiet and viciously brutal. Gosling’s character doesn’t want to hurt anyone– but it seems everyone thinks he’s has an agenda.

This is a seriously dark flick– and if you can’t handle the violence, perhaps wait till this comes out on DVD. This movie should garner Mulligan and particularly Gosling some sort of nomination or award. I recommend it and I would see it again because it uses the best parts of Los Angeles to good affect both in positive, upbeat way and also deeply sinister.

Another film recently released is THE DEBT starring Helen Mirren, Jessica Chastain, Sam Worthington, Marton Csokas, Tom Wilkinson and Ciarán Hinds– as 3 young Israeli agents out to capture a Nazi war criminal. The shift of the focus on the younger people (Jessica Chastain is amazing) is intercut with the older version of the same characters and what has happened to their lives since they returned from their mission to capture this Nazi.

The elements of the plot require you to focus a great deal and the “period” scenes are really good. The biggest issue is that the man Rachel falls in love with is inaccurately portrayed physically later on in life and it seems that he has some issues and it’s just hard to figure out who he is and why he took the actions he took. Helen Mirren and Chastain are great. This movie does not have the ending you think it would have but it does have a resolution. It too is extremely dark and the secrets that the characters have carried with them over the years are ultimately their downfall.

Another movie you probably did not see because of all the bad reviews was Cowboys and Aliens. Starring Harrison Ford, Daniel Craig and Olivia Wilde and a huge ensemble cast, it’s Wild Bill Hickock meets ET on the dark side of things. Maybe it’s got a bit of Star Wars as well. This is an interesting movie. Give it some time to open up. It’s funny and its different. The plot is not easy to figure out other than everyone wants to get their kidnapped loved ones back. The trick is that Daniel Craig has the missing puzzle pieces — and Olivia Wilde is not everything one thinks she is.

Definitely worth the popcorn if you want a lighter-hearted movie that isn’t so dark, I found it fun, interesting and that Daniel Craig was really good as something other than James Bond!

Columbiana brings you Zoe Saladana as a female bad-ass assassin who has learned at an early age that there is no way she can be safe because of the people who killed her parents right in front of her. Her Father had left her a way to get to the US to family here in the states and she learned from his brother how to be an assassin. Not exactly what he wanted for her but it was something she knew she had to do– to kill all those people responsible for the death of her parents.

Saldana kicks serious butt in this role and it’s dark too and full of action. She did pretty much all her own stunts too– so the feel is gritty and authentic. Loved the movie. Thought it was a powerful statement about what a woman could do and how she managed to accomplish it. Oh yeah, Michael Vartan is there as eye candy. He’s definitely a contrast and there is a possibility this might come back as a part 2 but don’t count on it. It’s definitely worth seeing– if not in the theater, then on DVD!!

Helen Mirren and Alfred Molina show up in the Blu-ray version THE TEMPEST currently out on DVD. (Available only in Blu-ray). 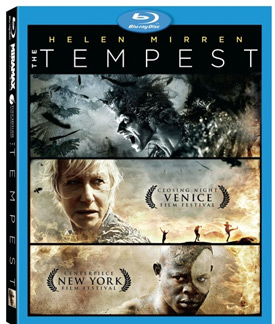 
Asleep in the Woods


The special effects –particularly of Ariel– are amazing– and Helen Mirren certainly seems to be the potent mistress of alchemy. Her daughter is believeable as well as her counterpart, the young man. It just seemed odd that all the men were wearing Elizabethean clothing and yet the contemporary feel of Mirren and her daughter’s costumes were quite a distraction. I thought the dialogue was good but after a while- it was really conversational but for those not well-versed in Shakespeare, you might find it a bit tiring. (Meaning it would have been much better on the big screen!)
You can find The Tempest on Blu-ray at Amazon.com and major mass merchandise stores.
Every movie listed here is still in theaters!

Get ready for your close-up with Smashbox’s Fall Collection, Girls on Film—at Beauty.com!