“Scarlet Rivera, Violinist/Composer, Is Releasing a New EP “All of Me” and Her Tour Hits California!

Home » Alt Music » “Scarlet Rivera, Violinist/Composer, Is Releasing a New EP “All of Me” and Her Tour Hits California! 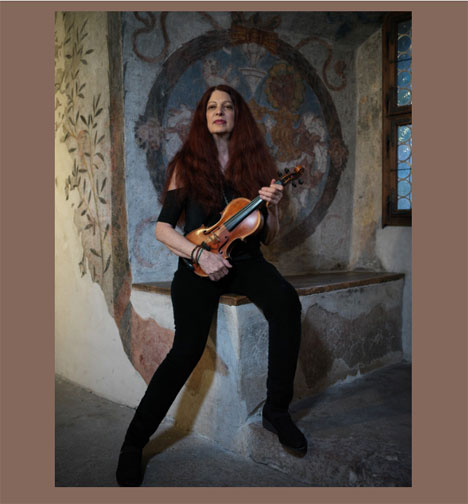 World-renowned violinist and composer Scarlet Rivera has come a long way in her music career since being first introduced to the world by the legendary Bob Dylan as his featured violinist in 1975. Today, she proudly announces the release of her new upcoming EP, All of Me, her 12th solo body of work set to release in February 2020 on Bright Sun Records.

On the All of Me EP, Rivera combines her versatility as a world-class violinist with her singing and songwriting skills to create six original songs. The songs cover various topics from women’s empowerment and political power to self-identity and the wisdom one gains from living life. The EP also includes the track “Songbird” that pays homage to iconic singer-songwriter and Rivera’s contemporary, Joni Mitchell.

Originally trained as a classical violinist, Rivera explored adapting the violin into several other music genres and styles, including Americana, rock, new age, Celtic and world music. It was this innovative spirit that got the attention of Bob Dylan in 1975. After an impromptu audition, Dylan asked Rivera to perform on his 1976 album, Desire, that went double-platinum and was considered one of the biggest albums of his career. Dylan featured Rivera on every track, being impressed with her versatile playing and improvisational skills. He later invited Rivera to accompany him on his Rolling Thunder Revue. This year-long tour featured a lineup of legendary artists, including Joni Mitchell, Mick Ronson, Roger McGuinn, and Ramblin’ Jack Elliott, among others.

Since then, Rivera has gone on to be featured on recordings and tours by many other major label artists, including the Indigo Girls, Tracy Chapman, Eric Andersen, Keb’ Mo’, Peter Maffay, David Johansen and Sylvia Tyson of ‘Ian and Sylvia’, and five-time Grammy winner Cindy Cashdollar. She also released 11 solo albums of her own, including genre-bending Celtic and rock albums that cemented her place as one of the world’s most prominent and versatile violinists of her time.

Rivera was recently featured in the 2019 film, “Rolling Thunder Revue: A Bob Dylan Story by Martin Scorsese.” The film includes captivating original footage of Rivera both behind the scenes and performing live on tour with Dylan in 1975.

You can see Scarlet Rivera in this “trailer” of “Rolling Thunder Revue”at mark 1:31 and she is on the left side of the frame. She is playing the violin!

Rivera’s latest EP, All of Me,  features the artist’s vocal talents as well.
The EP’s producer, Tim Goodman, assembled an impressive lineup of recording musicians for this project. They include:
Mike Finnigan on keys (Bonnie Raitt, Crosby Stills and Nash, Jimmie Hendrix and many more);
Steve Ferrone on drums (Tom Petty and Eric Clapton);
Jimmy Haslip on bass (the Yellow Jackets, Chaka Kahn, Jeff Lorber and Bruce Hornsby);
Andrew Kasner on guitar,
Bill Bergman on horns (Jack Mack and the Heart Attack);
Tim Goodman along with young Blues phenom, Delaney Pickering, on guitars.

Check out Scarlet Rivera’s upcoming EP, All of Me – out in February 2020.

Rivera continues to be an active recording artist, performer, and composer. She is on tour in California with ‘American folk music’ singer-songwriter, Eric Anderson.  This list of dates is in the image below. Buy tickets now! 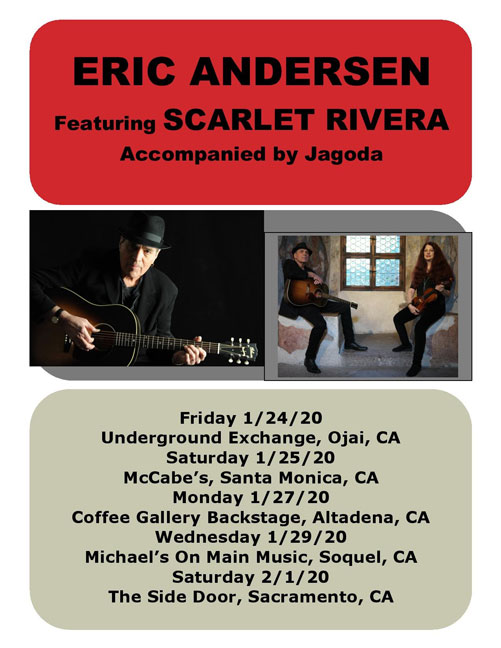 She also uses her musical talent towards helping protect wildlife, the environment, and animal rights. She performs regularly for the concert series, “A Call 2 Peace,” where she performs some of her original music. The proceeds from every concert are donated to different charity organizations.
She is the Director of the World Peace Violin Project, under The McCollum Foundation whose mission is to bring about social justice, planetary sustainability, and world peace. Rivera also released music on her Voice of the Animals album as a way to advocate for wildlife conservation and the humane treatment of animals.

Here’s a video of Scarlet talking about one of her activist projects: LADY LIBERTY, a project that  is clearly very near and dear to her heart (and the rest of us too!)

This is your “limited time opportunity” to see a musician who has worked with Bob Dylan and so many other great musicians and singers. She’s AMAZING!!