If you have ever watched Nickolodeon, then you might be familiar with the TV show, “The Naked Brothers Band” starring Nat & Alex Wolff. Now that the show has gone dark, Nat & Alex have spent some serious time in the recording studio, putting together their album Black Sheep on which they played all the instruments and wrote all the songs. These two young men are just that– not only children of actress Polly Draper and musician/composer Michael Wolff— musicians who have chosen to leap into their musical career while still young (not even out of high school yet). 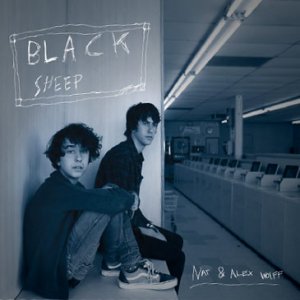 Black Sheep is third studio album, and their first to be released under their own names, Nat and Alex Wolff is out now and they have been doing relatively short touring gigs out there to promote it. 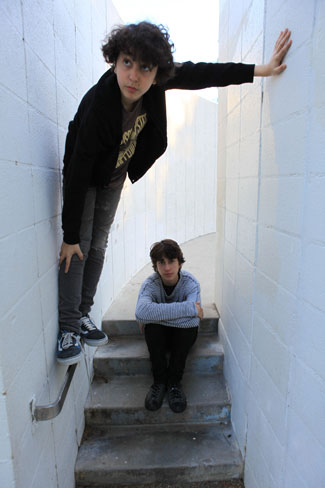 Their greatest influences continue to be the Beatles and Nirvana, and their taste in music is an eclectic appreciation of artists such as Weezer, Bob Dylan, Green Day and The Velvet Underground. “Black Sheep” represents an exciting step into new territory, one that the duo is ready to take by storm. Since the finale of “The Naked Brothers Band”, Nat and Alex Wolff have not only made this epic new album, they have been very busy with acting roles too which they discuss in this podcast.

Who ever thought that the innocent little fetus born on December 17, within five years of life would be writing smash hit songs that put 30 year old rock-stars to shame? Nat Wizzolff, my bro, is a prodigy to say the least. He was the youngest person to ever be on the album charts EVER! Nat, since he was a little boy has been someone who could pick up an instrument and know it without lessons or musical education. His influences were prominent in his songwriting and they still are. Nat’s music has a unique honesty. I admire and strongly envy his ability to mess around with words and ideas and piece them together like a puzzle. His acting has the same organic feel that shows he’s not lying to the audience & it is all coming from a deep place inside him. He has been nominated for a Kids Choice Award both in America and Australia for his acting and for our second Album “I Don’t Want to Go to School”. He also has been featured in films like “Peace, Love, and Misunderstanding” starring with Jane Fonda and Catherine Keener where his quirky acting and bushy mop top will have the audience cracking up. His lack of façade astounds me as he can enter a completely new place, with a complete new group of people, and he has them slapping their knees at characters and jokes within milliseconds. Aside from his acting and his music, Nat is a person that many people want to emulate. His empathy is impressive, and I appreciate how understanding he is. He is just a good dude to talk to as well, and that’s great because he’s my brother. He’s a great dude… And if you’ve met him… then you know.

My brother Alex is a talented little dude…an excellent musician. He is a great drummer who learned to play from watching tapes of John Bonham and Ringo Starr. In addition to the drums, he also plays guitar, piano, ukelele and violin. He produces his own tracks on the music program Logic and wrote the theme song to our web series. My favorite of his musical talents is his inherent ability to write unique, complex and heartfelt songs. We have always inspired each other to write music and are excited about each other’s songs. We have less of a competitive Lennon/McCartney songwriting relationship but more a mutual admiration and respect for one another’s songs. Lately, we have been writing a lot together and it is a very rewarding experience. However, he is not only a fantastic musician, but a fine actor and playwright. He has acted in many projects including the HBO series” In Treatment” where he made me forget he was my brother. He also wrote and performed in his middle school play, and wrote a musical called “What Would Woody Do” and being the good bro that he is, cast me as the lead in the play. He has written four or five screenplays (I’ve lost count), all of which are awesome and could have been written by an adult.

At an early age Alex put many of his skills to use writing songs, acting and performing in the Nickelodeon series “The Naked Brothers Band” with his older brother, me, Nat Wolff. “Living my life like a hurricane” are lyrics from Alex’s song “Sitting in my Sorrow” and I think that sums him up pretty well. Alex can’t walk into a room without being noticed. He is always a force to be reckoned with. Whether he’s walking down a school hallway with a crowd of adoring girls, or when asked by an interviewer what the most secret object in his room was, he said, “Why would I tell you?” Alex gets a lot of his artistic inspiration by obsessing over different musical artists, actors, writers and filmmakers (His current obsession is Kurt Cobain and I never thought I’d be tired of hearing random Kurt Cobain facts… but I am) but despite whatever his current obsession may be, Alex is still incapable of being anything but Alex Wolff whether he likes it or not.

Thanks to Nat & Alex Wolff for their time– it was a much longer interview but I chopped it down because we were having waaaaay too much fun.

If you are going to feature content from LA-Story.com including podcasts or videos including the accompanying text, please respect copyright provisions. We require a notation of content origination (meaning credit tag), a linkback to the specific page & please email the link to stevie@la-storyblog.com before the piece goes live.
LA-Story.com, LA-Story Recessionista, Celebrity Stylescope, Celebrity Style Slam Trademark/Copyright: KBP Inc. 2007-12