Alge is an interesting singer. Having worked in various musical configurations, Alge is Los Angeles-based producer, songwriter and vocalist, JON WEINMAN. As Alge, the vocals carry a unique and expressive sound as Alge digs into the gig of the moment. This new “persona” is worth a watch for a stylistic challenge both musically and visually. As an alternative R&B artist, Alge, gives us a glimpse of the afterlife with his newest focus track, “Waiting on You.”

The track is the fourth single from Alge’s debut EP, Diamond Inseams, which is set to release on November 20, 2015.

The write-up on the Mid-City Music Lounge ‘s website (about Alge) is really interesting. I think they describe Alge best. Realize that Alge is a persona that Jon Weinman has created (much like Lady Gaga is the external for the internal Stefani Germanotta)

Alge is the vehicle for LA-based producer and vocalist Jon Weinman to actualize his brand of classic American pop songs underlaid with iced out atmospheres atop pulsating foundations. Equally influenced by hip hop and folk music, the writing has layers that beg to be peeled back as literary lyrical flourishes illuminate the oneness of the human experience and cast the listeners eyes skyward. Both cosmic and creepy, brooding and uplifting, the songs breathe in blocks of color, creating a sound that is both engulfing and singular. 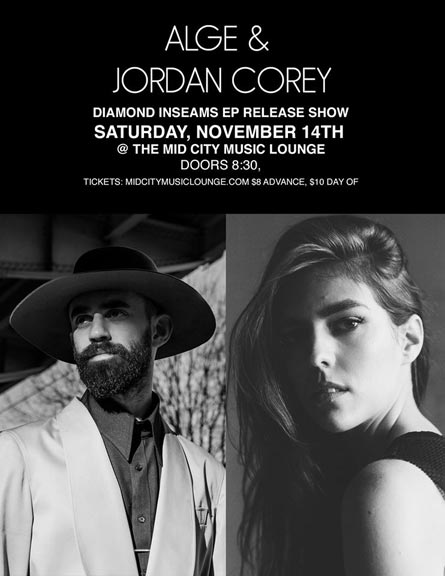 Alge was conceived in early 2014 as the solo project of New York native, Jon Weinman. After graduating from NYU’s Clive Davis Institute of Recorded Music, Weinman began writing and producing for his first band, Sioux Lion, as well as for other artists in NYC. He broke out on his own in January, 2014 to create his new sound and Alge was born. Weinman has released four singles since January, 2015, garnering features in The Wild Honey Pie, Impose Magazine, LA Buzzbands, I Heart Moosiq and Acid Stag.

I am Tuned Up describes Alge’s music as “tribal, oddly produced alternative R&B that would be well suited supporting Lorde on a future tour.”

Equally influenced by hip hop and folk music, Weinman draws from a diversified sound spectrum, including 90s hip hop, trap, chill wave, new wave, garage, techno and alternative R&B. Weinman’s music has been compared to David Bowie’s Young Americans album, Autre Ne Veut and Mura Masa. Be sure to check out the latest single by Alge, “Waiting on You,” from debut EP, Diamond Inseams, out this November.

Advance copies of Alge’s Diamond Inseams EP will be available.

Advance copies of Alge’s Diamond Inseams EP will be available. Come party with Alge! He and Jordan Corey will be sending good love up into the ether.

Don’t miss this opportunity to catch Alge. There’s something so unique (and twisted) about his sound. You can’t help but listen.
PS: Got to love the yeard (the name for the year-long growth of that beard. Alge gave it a name!)

FREE 2-day shipping on all your orders. No minimum purchase required. Enroll now.

Receive a free Fall Fragrance Sample Bag with any $25 purchase. While supplies last, use code: FALLFAVES

If you are going to feature content from LA-Story.com including images, podcasts or videos including the accompanying text, please respect copyright provisions. We require a notation of content origination (meaning credit tag), a linkback to the specific page & please email the link to stevie@la-story.com before the piece goes live.
LA-Story.com, LA-Story Recessionista, Celebrity Stylescope, Celebrity Style Slam Trademark/Copyright: KBP Inc./TNBT Inc 2007-16