And the SURVEY SAYS: EBATES Survey Reveals that Americans Prefer Road Trips to Other Types of Travel!

–That Summer Is Their Favorite Season For Hitting the Road,
— And That 60 percent Do Not Travel Internationally!

Summer is here, and, according to new data from Ebates, a leader and pioneer in cash back shopping for retail and travel and subsidiary of the global internet services company Rakuten, most Americans will be taking the opportunity to hit the highway.

The Ebates Summer Survey of more than 1,000 U.S. adults, conducted online by Propeller Insights on behalf of Ebates in June 2018, revealed how, where and for how much Americans will be spending their summer vacations.

Most Americans (82 percent) take 1-3 vacations a year, and a lot of that vacationing happens over the summer: more than half of Americans (56 percent) say it’s their favorite time to travel.

The vast majority of Americans (92 percent) will be traveling domestically this year, 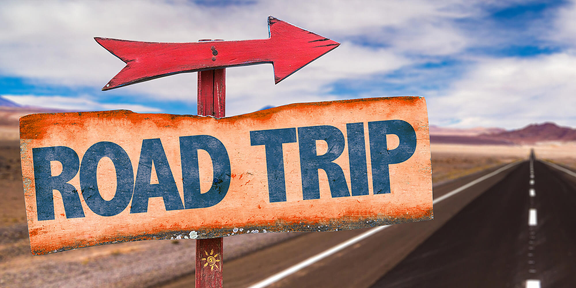 When in need of vacation destination inspiration, Americans are more than twice as likely to turn to friends (51 percent) and family (58 percent) than to travel TV shows (23 percent), sites like TripAdvisor and Yelp (23 percent), or social media (23 percent).

● Millennials are much more likely than other Americans to turn to social media (37 percent), Pinterest (17 percent) and travel bloggers (18 percent)

Americans most love traveling with their significant others and kids. Work is also the number one thing people most look forward to leaving behind when on vacation, and 60 percent of Americans who travel for business say they sometimes turn their business trips into personal vacations.

What We Love When We Vacay

Regardless of age or gender, what Americans most want out of their vacations is relaxation (83 percent) and fun (68 percent). About half of Americans are also looking for adventure, and fewer than a third hope to find romance, although, for Millennials, adventure (62 percent) and romance (34 percent) are a much higher priority.

What kinds of vacations do Americans most love and hate?

Most Americans like to spend about a week on vacation. Some, however, vacation for a bit more time (19 percent), and some for a bit less (35 percent), although women (11 percent) are almost twice as likely as men (6 percent) to prefer a quick weekend getaway of 1-3 days.

For those Americans who don’t travel, the cost is the biggest obstacle (53 percent).

How—and How Much—Americans Spend on Travel

How far in advance of travel are Americans booking plane tickets and hotel rooms?

It’s a pretty even split between advance planners and procrastinators:

Interestingly, 43 percent of Americans say they book travel directly through the brand. Another 36 percent use consolidator sites like Orbitz and Kayak, and 21 percent book travel through a site that specializes in travel deals, like Ebates.

“Our survey shows that this summer is going to be a fun one for the many Americans hitting the highway.” said Amit Patel, CEO of Ebates. “Our survey also revealed that the top reason some Americans don’t travel is because of cost. Ebates makes it easy to find incredible travel ideas and deals so everyone can enjoy their ideal summer vacation—even on a tight budget.”

Ebates rewards members with cash back on purchases while also providing access to thousands of coupons, discounts, promotions and special deals, including free shipping. Free membership allows consumers to shop online at over 2,000 of their favorite top-name retailers, online travel agents and travel brands while earning a percentage of every purchase they make. To date, Ebates members have earned nearly $1 billion, paid out quarterly in the form of a “Big Fat Check” or via PayPal. Because shopping with Ebates is hassle-free—no rebate forms to fill out and no points or miles to redeem—the site supports a strong community of savvy shoppers across the country and around the world. Founded in 1998 and acquired by Rakuten, Inc. in 2014, Ebates is headquartered in San Francisco.

Thanks to the  Ebates for this insightful piece on traveling. How does this stack up with your traveling habits?  Let me know either here by commenting OR  hit me up on twitter.com/lastory