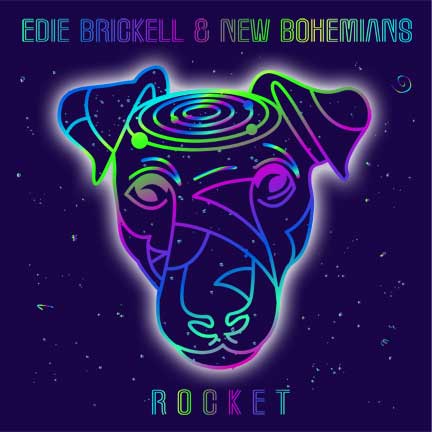 Edie Brickell & New Bohemians are back with a new record, Rocket, which dropped on October 12 via Verve Forecast. The band hit the road for a US tour this fall in support of the new recording, including a hometown album release show in Dallas on October 11 to kick it off. Full tour dates below.

About Edie Brickell and New Bohemians: 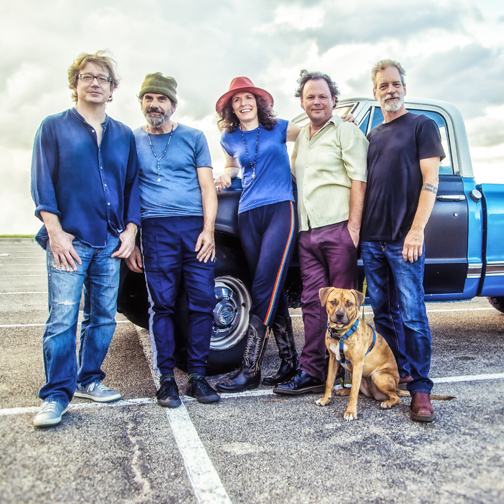 Thirty years ago, Edie Brickell and New Bohemians exploded out of Dallas and became an international sensation with their double-platinum debut album, Shooting Rubberbands at the Stars, featuring the Top Ten hit, “What I Am.” The follow-up, 1990’s Ghost of a Dog, came quickly, but the NewBos didn’t put out an album until Stranger Things in 2006. Now, the group returns with Rocket, their first new music in a dozen years—and as the title indicates, they remain a propulsive and unclassifiable force, a whirlwind of musical ideas and styles.

“This band has that special relationship of youth,” says Edie Brickell. “They’re nice people, fun-loving, and we have an ease and sense of humor we developed together. I always missed them, so every chance we got, we would get together to play.”

“Edie Brickell & New Bohemians have always been a testament to great musicianship, with unparalleled songwriting and improvisational prowess. The creative energy between Edie and the group is as electric as ever, and this new record captures that. We’re thrilled they’ve chosen Verve Forecast as their home.” 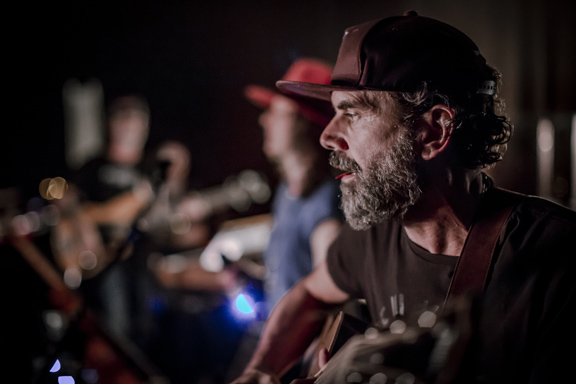 Though Brickell, of course, continued to create new music throughout the years—as a solo artist, with the Gaddabouts, and in collaboration with Steve Martin (with whom she co-wrote the 2016 Broadway musical, Bright Star)—she never lost touch with her first band. Every few years, she would reconnect with some combination of guitarist Kenny Withrow, drummer Brandon Aly, bass player Brad Houser, and percussionist John Bush and they would improvise new songs, just like they always did. But beyond the occasional show, the New Bohemians remained a private affair.

In 2017, the band reunited for three sold-out shows as a benefit for La Rondalla, an arts school where Withrow teaches. At the rehearsals, it became clear that something special was starting to happen.

“It’s actually hard for us to rehearse because we just start improvising,” says Withrow. “So we did what we normally do, and ended up writing a few songs. We decided to record a batch of them—we maybe started with three, but we recorded seven songs in eight days. We ended up with a body of songs and kind of fell in love with it.”

Withrow points to a couple of the songs on Rocket as examples of the band’s spontaneous process. The dreamy “Obvious” was captured on the second take, solos and all. One of the final songs they cut, the shimmering and propulsive “Superhero,” was written and recorded in one day. “Musically, that one took us to another level,” he says. “It’s mature in terms of its arrangement, but it came straight down.” (Brickell recalls her reaction when Withrow first played her the “Superhero” riff—“I just started laughing, like ‘here it comes!’”)

The sounds on Rocket bounce effortlessly between genres, from the disco strut of “Exaggerate” to the reggae lope of “Singing in the Shower.”

“Most people like more structure, but our band doesn’t,” says Brickell. “We’re entirely flexible and full of ideas—we might have a country bridge with funk verses, it can go in any direction, there’s a much wider range of expression. I grew up with a little more R&B and country, but they know a lot more about jazz and the Grateful Dead.

“I get bored listening to a genre-specific record, anyway. That doesn’t represent life. We’re exposed to all these different sounds, how can you stick with one flavor?
That bores me—and this band never bores me.”

Edie Brickell believes that Rocket is a new beginning for the New Bohemians, and the chance to make good on unfinished business now that she can get back in the mix.

“This band, with a male singer, would have kept on making great records,” she says. “I’m just lucky that they went in different directions, and now I’m able to plug back into them. The intention is to make incredible records in this next decade, and I believe that we will.

“I feel like I don’t have anything to prove at this point, which is a good feeling—with one exception, which is to show how great this band is. I’ve never known a band who can do what they do.” 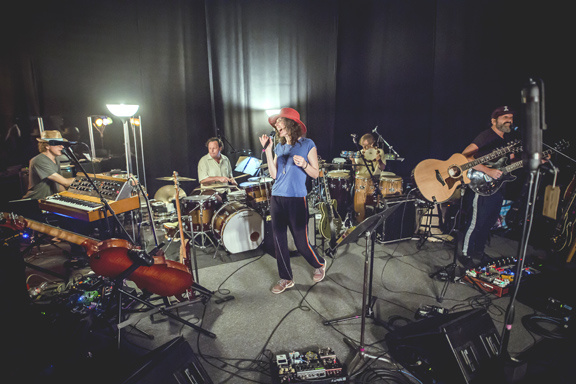 Tickets on sale NOW!
More ticketing information will be available at:

Hot New Products for YOUR Fall into Holiday Look at Sephora and Sephora.com

What it is:
A limited-edition highlighter with a reflective, foiled look in an oversized, covetable, gold compact.
Part of the Holiday 2018 collection of glittery shadows, and a high-shine lip gloss/lacquer as seen above.

What it does:
Get more of what you love with this larger-than-life luminizer that adds reflective radiance with the touch of a brush. The micro-fine, jet-milled powder applies seamlessly for a get-noticed glow without glitter. The warm, peachy-gold highlighter is perfectly sized for both face and all-over body use. Presented in a super-shiny, mirrored, gold compact, this foil lumninzer makes the perfect gift for someone who always glows for it.

From Nordstrom and Nordstrom.com!
Paris Lace Body-Con Dress from BARDOT BUY IT HERE! 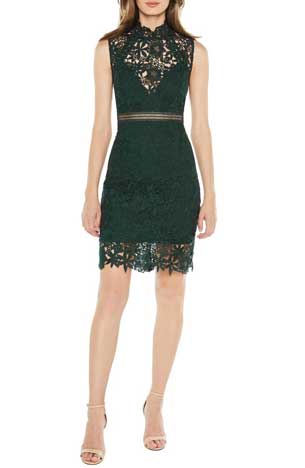 Left partially sheer at the bodice, waist and hem, a contemporary take on a classic lace cocktail dress shows off alluring hints of skin.
This gorgeous dress comes in five colors including this deep forest green. It would be perfect for holiday parties and New Years Eve!

Faux Fur Lined Plaid Biker Jacket,AVEC LES FILLES Buy This HERE:
Get the best of two different trends: a biker jacket done in PLAID. Plaids are the haute trend of the moment so why not wear it in the non-traditional biker jacket! 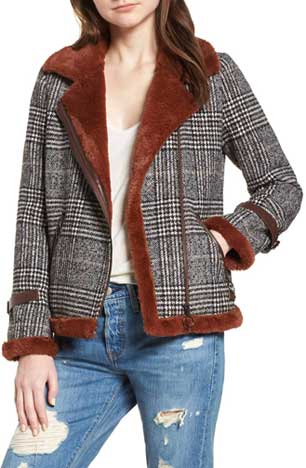 Contemporary biker style reaches back to classic British racing wear for a retro-contemporary mashup on this plaid jacket featuring a faux-fur lining for style and warmth and faux-leather trim for the finishing touch on the look.

If you are going to feature content from LA-Story.com including images, podcasts or videos including the accompanying text, please respect copyright provisions. We require a notation of content origination (meaning credit tag), a linkback to the specific page & please email the link to stevie@la-story.com before the piece goes live. LA-Story.com, LA-Story Recessionista, Celebrity Stylescope, Celebrity Style Slam Trademark/Copyrig