This review is courtesy of Stella Louise. Stella is a professional writer/editor whose talents also include SEO, Social Media and Community Development. She is also an unrepentant TV and movie junkie who posts reviews and other pop cultural musings on her personal blog,

Scheduled for a limited release on June 15, 2012 after well-received screenings at 2012 Sundance Film Festival as well as 2011 Toronto International Film Festival and 2012 Glasgow Film Festival, Lynn Shelton’s Your Sister’s Sister definitely achieves a measure of realism, insightfulness and poignancy. The center of the story revolves around Jack (Mark Duplass) who, a year after his brother Tom’s untimely death, is feeling stuck and conflicted. Tom’s ex-girlfriend, Iris (Emily Blunt) sends him up to her family’s remote island cabin to have some “alone time”–but this plan is foiled when Iris’ lesbian sister Hannah (Rosemarie DeWitt) simultaneously decides to use the cabin as a getaway following the dissolution of her seven year relationship. 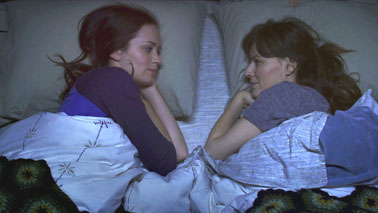 Mark and Hannah commiserate over a bottle of tequila which leads to a drunken sexual encounter. Then Iris decides to show up unexpectedly furthering complicating the situation. While Shelton is credited as writer for the film, much of the character’s back stories and dialogue was created by the actors as Shelton’s technique relies heavily on improvisation. I give props to all three actors—they handled the unexpected with ease delivering performances that felt fresh and real. Although Emily Blunt’s accent was briefly explained (the sister characters had the same father, different mothers and Iris grew up in London), it seemed to me that her normally adeptness with American accents (see: Sunshine Cleaning) would have succumbed to the challenges of improvisation’s on-the-cuffness. 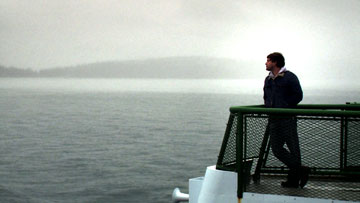 Duplass brings an amiable slacker sensibility to the character of Jack—one that reminds me of the title character in his film, Jeff, Who Lives at Home. Blunt offers a winning mixture of no-nonsense compassion and vulnerability as well as convincingly conveying the adoration of the younger sister that Iris has for Hannah. DeWitt is completely believable as the brittle and acerbic Hannah and all three actors played well off each other. Filmed over 12 days on the San Juan islands off the coast of Washington state, the cinematography exquisitely captures the natural beauty of the rural setting. While the sound quality is somewhat uneven, sound mixer and editor Vinny Smith contributes aurally via his original music for the film’s soundtrack which provides an unobtrusive and synergetic backdrop.

I would have liked to have seen more exploration of Jack’s conflicted feelings towards his dead brother, more exploration of sibling rivalry and family dysfunctions and dynamics. As it was, these things were hinted at but mostly glossed over. It may be the fault of the brisk 90 minute running time (another 30 minutes could have dug deeper into these issues while still offering a reasonable two hour runtime), it may be the result of a film largely conceived via improv vs. a well-planned script. Sacrificing “depth” for freshness and realism is not the way I would have chosen to go, but overall My Sister’s Sister is a satisfactory if not stellar filmgoing experience.

Thank you to Stella Louise for her insightful review. Follow her blog on Well Above Average.
Stevie Wilson,
LA-Story.com