Pulling the Trigger on Fall 2013 DVD, TV & MOVIES!! The New, the Yet-to -Arrive- and the Already-Out-There!

What’s hot in theaters, TV, DVD? TONS!! Starting with last things first, I am diving into DVDs because that will keep you happy the longest. After all, a marathon of series episodes is killer whether you have a family, a relationship, sharing with BFF’s or just watching solo!!
Here’s what’s new right now that you should be seeing. 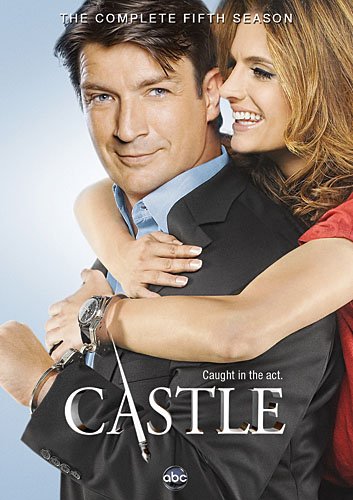 One of my favorite shows is CASTLE!! Season 5 was a serious rollercoaster of emotions and events as Castle and Beckett finally “connnect. There are no spoilers here so I am showing you only the best little bits from episodes 1-9. It’s worth buying this now or as a gift for a birthday or holidays.
Here’s what comes on this DVD set:

This is a DVR series for me so I NEVER miss an episode. I can tell within the first 2 minutes if I have seen the episode before. I think that it’s well-acted with a nice blend of crime drama and light-hearted repartee. In other words, I love it. I can’t say anything bad about it. I have been watching all 5 seasons– and I am not going to stop!!

Nashville debuted with Hayden Panettiere and Connie Britton this season. It kicked off with a bang but has seemed to sputter. A friend & colleague of mine highly recommnended this to me though she knew I wasn’t a die-hard country fan. 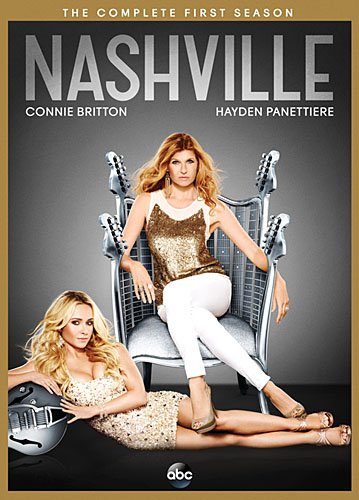 It’s more like a drama with music woven into it– it’s not a musical at all. That definitely got my attention and the interesting threads of the people in the lives of these two competing singers is really interesting: former lovers and wannabe lovers; families that are anything but supportive. There’s a lot going on — almost as good as Dynasty with a C&W twist. Have to say Hayden does a great job but Connie Britton blows everyone away with the way her character is written. She does a great job.

Nashville is a show about two country queens both living in Nashville and working on their respective careers, although it can sometimes be tough for a veteran of the business and a trendy young thing to find common ground. The city of Nashville is at the heart of the drama, and it’s fitting that fans will get a behind-the-scenes tour in “Nashville Comes To Nashville,” a segment that tours the landscapes and buildings that make the show authentic. Additionally, Rayna’s kids on the show, played by Lennon and Maisy Stella, get their own segment on the disc. ( These are the 2 young girls who did a segment on GMA and wound up on the show playing Rayna’s girls. These are real singers!)

This DVD has 5 discs and 22 episodes and while at some moments might seem very soap operaish, there’s a lot to keep you busy thinking and watching!
Nashville DVD Bonus Features
“Nashville Comes to Nashville”
“On The Record – The ‘B’ Side”
The Stellas Go On “Tour”
Deleted Scenes
Bloopers

If you haven’t seen it, it’s worth buying or if you know a C&W music lover, this would make a great gift!!

Star Trek: Into Darkness— a sequel of the prequel with a surprise ending that blows everyone away!

Available as DVD and 3D/Blu-ray– and it’s worth a watch– if you are into Star Trek. With Chris Pine, Zachary Quinto and Benedict Cumberbatch (Sherlock) along with Simon Pegg and Zoe Saldana, it’s a great cast.

this was my kind of movie. YES I paid to see this and I will rent this to see it again. It’s definitely for the Trekie and that they have
When the crew of the Enterprise is called back home, they find an unstoppable force of terror from within their own organization has detonated the fleet and everything it stands for, leaving our world in a state of crisis. With a personal score to settle, Captain Kirk leads a manhunt to a war-zone world to capture a one man weapon of mass destruction. As our heroes are propelled into an epic chess game of life and death, love will be challenged, friendships will be torn apart, and sacrifices must be made for the only family Kirk has left: his crew.
It’s up to you whether the ending disappoints or thrills you. However there is a lot of action and you have to focus to stick to the plot– because it’s very different. Watch carefully for references to original and other Star Trek series.

Other DVDs worth seeing would include: Oscar nominated Amour,
MUD featuring Mathew McConaughey and Reese Witherspoon (great reviews but pretty dark),
The Bling Ring from Sofia Coppola who dropped the ball on this one by glorifying a ring of teen thieves here in LA who broke into celebrity mansions who were stupid enough to video and photo themselves doing it.
Great Gatsby with Leonardo DiCaprio and a stellar cast should have been a great movie except I think that pasting it against a contemporary music backdrop was a mistake!

Summer is over and lots of shows have had season finales or series finales.
Season Finales: Of the shows listed below you should be able to catch them on the cable network in reruns and also on DVD — though not the actual season finale will be available for a while.

Dexter: Michael C. Hall and crew departs Miami (AKA Long Beach, CA — yes really!! It was shot in the town where I spend a lot of time!) By the time you read this, the series should be over or heading to finale at lightning speed– and I do mean lightning speed. This last season is one you should watch probably twice to catch the nuances (I found watching some episodes twice helped me understand the next episode and feel what Dexter and Deborah does with more depth).

Breaking Bad
I came into this series WAY late. I wasn’t in love with the thought of a chem teacher with cancer selling meth but then there are lots of warped and broken people and Walt is one of them. Jesse and Walt are salt and pepper for the school of creative entrepreneurs. I found that the acting was sooooooo much better than most series. Love it and at least I can watch the entire thing from start to finish– and do it for a L O N G time!!

Burn Notice
The series that took me to USA Network and made me a USA Junkie was this series. I have seen every episdoe at least 2-3 times. (Yeah I know Jeffrey Donovan told me that I might want to seek help on a round-table phone interview. Good acting and action all in one makes for interesting TV). How this series ended — and it HAS ended.. is sad for those who were left behind. I just hope someone can come up with an idea to make this into a movie a la Star Trek and Star Trek Next Generation!!

Other series I want to watch that are on now:
GRIMM
PERCEPTION
Suits:
White Collar
Covert Affairs
Nikita

Agents of S.H.I.E.L.D. This is the ONE iffy one that makes me wonder– will this even be worth watching!

I have been trying to find decent movies to see: and now they are starting to come out but here are a few that I HAVE seen and worth spending some bucks on:

Worlds End – directed by Edgar Wright with his collaborative team of Nick Frost & Simon Pegg and the entire crew. They have been together for 2 decades ( I know– I interviewed Frost and Wright almost 10 years ago)

IT IS FUNNY, twisted, weird and definitely a blast from the past as one guy tries to get his old gang together. Someone actually manages to grow up too.

Elysium– the next episode from the director of District 9 which I saw twice. This is studio backed and clearly the special effects budget won out over the depth of the plot
However Matt Damon and some of this do make sense, just not enough to spend $$ to go see it in theaters!

Riddick for those who love sci-fi. This picks up where it left off but in a very different way of handling it. I love that Diesel put everything to the mat to get this made. He’s amazing in this role and the cast is terrific. Love the special effects and while it might seem a bit on the “light” side, the longer you sit there, the more terrifying it gets.

There’s so much more– but this is MY take, my likes (and dislikes).