Home » Halloween Is Coming: Got a Costume? Here’s 1 Way to Be “All In” For Halloween #SteamPunk Style! #SteamPunkGoggles

Halloween Is Coming: Got a Costume? Here’s 1 Way to Be “All In” For Halloween #SteamPunk Style! #SteamPunkGoggles

Halloween is a fun time of year- particularly for kids. We all know how much they like to trick or treat. However what an adult (*said with a dose of cavalier attitude and a bit of a snarky smile). The biggest issue is often with costumes and looking fun and interesting without spending serious bucks for costumes and items that you see in photos after the event and wonder what were you thinking when you decided on that outfit?

Here’s a little costume help, a nudge to push you in the right direction that will help you find a new culture or reservoir of content and ideas to draw from for Halloween. Guess what, it’s easy to find and also relatively easy to wear. Take a look at SteamPunk as your resource for interesting ways of creating costumes for special events like parties, Halloween and even fun things like New Year’s Eve. 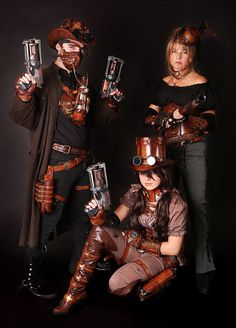 What is SteamPunk?
SteamPunk is a trend (lifestyle and fashion) that I have suddenly seen around a lot lately. The “sudden” part of it– doesn’t mean that it just popped up – but actually it just became part of my visual landscape. In other words, I just noticed it. According to SteamPunk “dictionary” it’s many things but initially is a literature genre that has morphed into a design and also a fashion & beauty genre as well. There’s a lot of latitude to the look- it’s what works for you and your budget. If you google up SteamPunk, you will find a variety of sites and definitions. Here’s a site that gives you the short and sweet version: http://freepblog.wordpress.com/ It’s also emerging as the next big trend in personal objects (computers to furniture to “toys”) and fashion/beauty according to Time Magazine (article 1 ; article 2) and MarketingViability.com . There are many more articles out there on this far-reaching trend!


The cool thing about League of S.T.E.A.M. – is that is shows you a ton of cool episodes and photos and you can engage the cast & crew with questions should you so desire. Do follow them on Facebook and twitter.

SteamPunk is essentialy a LARP (Live Action Role Play) or a VR type of situation — though there is not “virtual” to it. The trick on this is to realize it’s a bit of Jules Verne 20,000 Leagues Below the Sea + Zombies & various other critters + Edwardian (think a pretty accurate Panic in the Disco look. ) + a shoot ’em up a la any action game or movie + an attention to detail based on an Edwardian meets Punk style. Get it ? Hope so because you are going to listen to me babble on about this for four weeks. 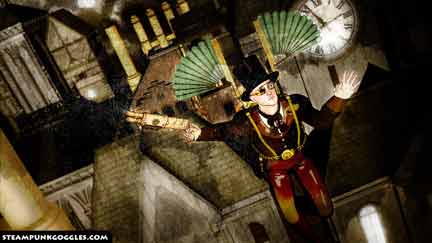 What’s really funny about the SteamPunk context is that I have followed various movies that are feature elements that are part of the SteamPunk culture: Riddick, Van Helsing (I never said they were great movies), Oblivion, A Series of Unfortunate Events, The Prestige, The Golden Compass, A Clockwork Orange with a bit of Star Wars, Star Trek (think Star Trek Next Generation – The Borg!) mixed in for good measure. This list might look very convenient – and I found it on SteamPunkGoggle.com‘s blog! When I went through the list, I realized I had seen all of those movies and more in that genre. Go figure that out. Guess I am more in that genre than I realized – but if you saw the numbers of pairs of shredded jeans I have and some of the more unusual pieces of jewelry that are made from construction type hardware like brass links, copper chain and other similar metals, it’s not hard to see why I am interested in that SteamPunk vibe. 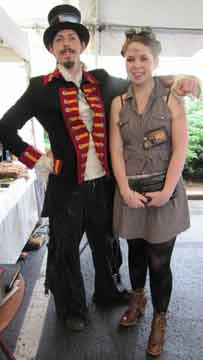 Fairly easy to do and affordable SteamPunk costumes. Photo courtesy of SteamPunkGoggles.com

One of the easy ways to test drive the SteamPunk look for yourself is Halloween costumes. Perfect for guys (especially those that are handyman types) and easily created by girls. You could pull elements from HotTopic.com (everything on that page works.) Also check out SteamPunkGoggles.com for the great blog post to give you some ideas on how to easily curate/create a suitable costume. 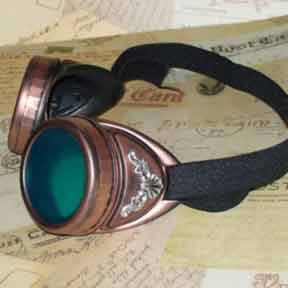 Before you go crazy shopping, do some online shopping and select what you have found that seems feasible for your body type, your personal style and the look you want to achieve. Before you burn a hole in the plastic, I would suggest price out the accessories first to figure out what you need because you might have some elements such as workman type boot (*variations on the Doc Martin type of boots or anything that is just below mid-calf), hat (cowboy, newsboy cap, top hat or other vintage headware), jewelry, tights, utility belt and/or messenger bag as well as goggles. This gives you and opportunity to cut off a lot of spendy costs for costumes by vintage or second hand store shopping for shoes, clothing and jewelry along with items from your closet (or that belonging to a sibling or a BFF). You also might find some friends or colleagues that have SteamPunk activities so that you can borrow before you buy.\ 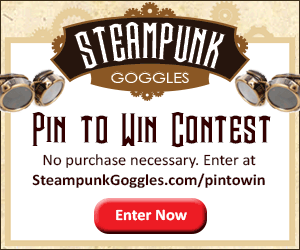 If you enter to win via the PIN TO WIN contest, you can potentially win a free pair of exceptionally cool goggles. Now do check out the SteamPunkGoggles.com site. The best collection of goggles I have ever seen and the online store is offering you a discount code & free shipping too. So head of quickly now and get into that site and buy some goggles. I will have mine soon and will be posting photos! Here’s the code for the discount: Coupon code TRIBERR1 gets $5 off PLUS free shipping on all orders over $30 at SteampunkGoggles.com

This is a sponsored post! After I ran the post on the League of S.T.E.A.M, I began to hunt online for sites and fashions that were part of that design aesthete. It was a bit “deja vu” to be invited to participate in Triberr’s campaign for SteamPunkGoggles.com. Considering that I have fallen in love with the CosPlay look (slang for costume play-acting) –and it’s not far from my fashion roots– it seemed a easy campaign to go “all in” as I dig into SteamPunk for Halloween and other holidays!