Having been online for what seems like eons, working on academic projects and papers while I was working on my masters degree, I know the importance of a functioning personal computer. As we all know now, if your computer is down, your entire world comes screeching to a halt. How many people have back-up computers to cover the “down” times so that work can be done in a fairly timely manner? I know that many people actually keep a “back-up” computer to use with their primary computer bites the dust. But what do you do when your “back-up” plan backfires and you end up with TWO non-functioning machines—an old one and a nearly-new one? Usually the owner turns to the brand for help and the brand works with the consumer on “making it right”. What do you do if the brand—in this case Lenovo—ignores the consumer’s complaint about a $900+ machine; or worse: claims the malfunction is a virus and demands an additional $200 from the consumer to fix it?

This is the plight of Donna Himelfarb, editor of academic, medical and scientific papers and articles for numerous professors, experts and magazines. I know Donna. I remember when she spent what I thought was an exorbitant amount of money on this computer. (I tried to talk her into a Dell clearance computer because I didn’t trust Windows 8.0.) I know other people who have purchased this brand and none have experienced the issues Himelfarb has. However I know this woman and she treats her computers like gold because they are part and parcel of her daily work. Because of this lack of response on the part of the Lenovo brand, I am sharing her commentary, which has already been featured—and ignored—on Lenovo’s Facebook page. The link that I have included on this post is merely the most recent post of the exact same content, other than to state that Lenovo still ignores her and that team managing the Lenovo Facebook page, keep removing her complaint.

It began with a frustrated, fatal smack to my steadfast Toshiba/Windows 7 laptop. My punishment for killing my computer? A journey into Lenovo/Windows 8.1 hell—an ongoing nightmare of software problems, frantic backups, and multiple returns to woefully inadequate “out of box” condition. And, just when I’ve lowered my expectations enough that I think I have the situation somewhat under control, hardware disaster.

(Shortly after I bought the Lenovo/Windows 8.1 machine, I bowed to experts’ advice and purchased a Mac, which has served me well so far. Unfortunately, I still need a Windows machine for job-related activities and software which can’t be shared between Macs and PCs.)

I continued to do battle with Lenovo/8.1, attempting to maintain it enough to use it, despite its sluggish speed, clumsy operating system and seemingly endless updates. Then came the day when I raised the lid and heard—and felt—a mechanical click. 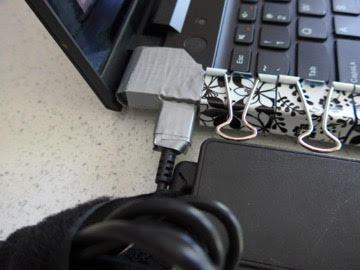 When I tried to attach the power cord, I realized that the computer had literally come apart at the seams and that the plug had retreated into the computer’s innards. I didn’t want to lose the work I’d done since the last backup, so, with the clock ticking and the charge waning, I used a pair of tweezers to coax the plug toward daylight, and, while holding the case together at the seams, I managed to reattach the power cord. It was just a temporary fix; whenever I tried to adjust the angle of the screen, I had to squeeze the case so it wouldn’t separate and swallow the plug.

With the laptop basically on life support, I searched for a way to stabilize the fix, knowing that if the power adapter was disconnected, the laptop would die as soon as the battery discharged. After multiple experiments—and a trip to the hardware store—my resurrected laptop looks like this: 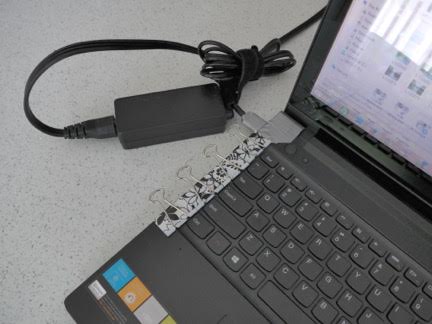 This is the computer that is being held together by duct tape and binder clips so that it doesn’t side apart.
When was the last time you saw a computer come apart at the seams? Donna Himmelfarb treated this computer like gold because it was quite pricey!

The Lenovo is somewhat stabilized, held together with binder clips and duct tape, permanently attached to its power cord (which is bound with Velcro), adjacent to a note that screams, “DO NOT TOUCH! DO NOT MOVE!”

I’ve wasted whole days—and nearly $1,000—on this machine. I contacted Lenovo a few times, but all I received were repeated claims that I had software problems (“probably a virus”) and, if I gave them another $200, they could fix the computer over the phone.
(Interesting comment that a virus would cause a computer to disassemble. I have never heard of that nor ever seen a virus cause a machine to self-destruct)

Rest assured that the only additional investment I plan to make will be to refresh the duct tape periodically when the heat from the laptop dries out the adhesive.

Eventually, because of work requirements, I’ll have to purchase another Windows computer, but I’ll try to hold out until another operating system is released and debugged. (Why doesn’t Microsoft debug its operating systems before releasing them?) Whatever I buy, I guarantee that it will not bear the Lenovo label.

I would like to thank Donna Himelfarb for being willing to put her sad experiences with her laptop in a piece. I certainly hope that LENOVO steps up to the plate and addresses why a computer that is used very carefully (and there are no children in the house) would come apart at the seams. I would think that tech support would have stepped up and asked to see photos and then sent a return label for them to fix it!

The interesting part is that the posts that Himelfarb has made to the Lenovo Facebook page has comments on it from Facebook users. None of them are from Lenovo personnel and Lenovo seems to remove the same post over and over again without any contact with Himelfarb nor explaining to her why her previous posts (which does not violate any Facebook TOS) have been removed by the brand.